Worth the Wait by Traci Douglass 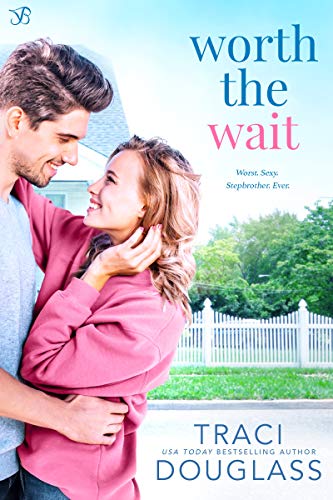 Mandy Reynolds needs a reset on life in so many ways. Her acting career isn’t exactly where she’d hoped it to be. She can’t even get a job as a germ for a commercial. When she inherits half a house she sees it as a sign and heads home to Heavenly Falls, Illinois. She’ll sell the house, and use the money to take her career to the next level in Los Angeles. That is if she can convince her hard-headed––and stupidly gorgeous–– ex-stepbrother, Alex Noonan, to sell fast.

The last time Alex saw Mandy, she was a gangly teen, who followed him around like a sad puppy. But she’s grown into a smart and funny woman, who is as frustrating as she is beautiful. The fact that they have to live in the house––together––while they fix it up, is one temptation he doesn’t need. And while he’s having fun spending time with her, she’s moving on soon, and he needs time to heal.

Plus, she has no idea he’s got a secret that could put a monkey wrench in all of her plans.