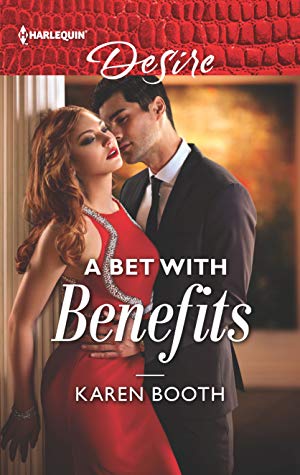 Can she stay away from her irresistible ex?

So when her sisters bet her she can’t attend a wedding as her gorgeous ex’s plus-one without falling for him again, Mindy stakes her future to prove she’s over Sam.

Will a week of passion with Sam be the one gamble she’s ready to take?

Mindy and Sam have been in the background of both  A CHRISTMAS TEMPTATION and A CINDERELLA SEDUCTION, the first two stories in the Eden Empire series.  Now, in A BET WITH BENEFITS, we get their side of their story, the entire story and in many ways, it is far different than what we might have believed.

Mindy is burning the candle at both ends, and the middle as well, trying to keep up with her own company and working with her sisters at Edens, the family generational business that all three sisters have jointly inherited… along with the troubles it brings.  She made the difficult choice to sever her ties with Sam, choosing family over their relationship but now she’s about to walk back into the lion’s den for Sam has something she needs desperately – and Mindy has connections that Sam needs to improve his “image”.  A compromise of sorts will bring them back together, at least temporarily.  And a bet with her sisters will once again play into how Mindy reacts to her feelings for Sam.

Both Mindy and Sam are strong personalities, each driven (for far different reasons) to be successful in their chosen fields.  Those strong personalities are going to come into play in their story since they may have had undeclared feelings before their final breakup but that silence between them has added to their complicated relationship.  Without giving away things I shouldn’t, I definitely understood Sam much better from this story – I “got” why he is, well, as he is now.  I, personally, have dealt with some of what Sam has gone through – although my dealing was different, I still felt empathy and understanding for his actions.  Yet, until he finally broke his silence Mindy had no clue as to what drove him, what caused the break in his friendship with Jake, or why success means so much to him.  It was an enjoyable, sizzling, and satisfying journey to their happy ending.

Now, we get to look forward to the next story in this series due out in November 2019.  If you love series, continuing threads that bind people and storylines together, a couple that must fight hard for their future happiness, and simply a damned good romance then you’ll want to pick up A BET WITH BENEFITS.  I had a blast and would not hesitate to recommend this story or the entire series to any Romance reader.

I own a Kindle edition of A Bet With Benefits.