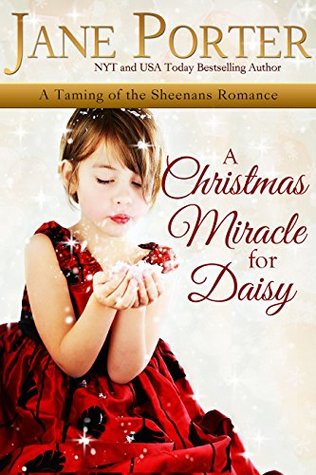 Media Mogul, Cormac Sheenan, had no desire to become a family man, but when his two year old goddaughter, Daisy, is orphaned, he adopts her, moving her from Montana to his home in Southern California, and becomes a devoted single father, juggling parenting duties with running his successful publishing, TV, and radio enterprise.

But two years later a frightening incident at Daisy’s school, shakes Cormac, and he decides to move Daisy–and his business–back to Montana where life is simpler and he has family nearby.

Now four, precocious Daisy strikes up an unlikely friendship with Marietta’s seasonal Santa Claus, and believes he’s the real thing, even though Cormac points out to her that this jolly old Kris Kringle is renting a room at Bramble House, not living at the North Pole. Daisy’s not worried but Cormac is as Rent-a-Santa has promised his innocent daughter she’ll have a mommy for Christmas.

Cormac is livid with Kris. He’s not at all ready to settle down, and he’s definitely not getting back together with his old flame Whitney Alder, so Santa can stop playing matchmaker as it’d take a miracle to make him fall in love, never mind marriage material.

But that’s exactly the kind of miracle our angelic Santa Claus has planned.

Read on for my thoughts on A Christmas Miracle for Daisy.  No true spoilers, promise.

Daisy has one wish for Christmas.  One that she believes with all her heart that Kris Crinkles can help with.  After all, he is Santa Claus.

Whitney and Cormac have a history.  A huge history.  She had loved him, truly expected to marry him… once upon a time.  When her goddaughter’s parents were killed in a car accident that injured Whitney as well the last thing she expected was to not have Daisy in her life again.  April had been her best friend for almost forever and Whitney knew that April had wanted her to be co-guardian of Daisy along with her godfather, Cormac.  But somehow that information hadn’t made it into the will which named Cormac as sole guardian – a single man with a multi-million dollar business to run.  Whitney had tried to legally get partial custody of Daisy, but that attempt only widened the chasm between her and Cormac.  Whitney still works for Cormac at his headquarters in Denver.  Part of the deal to continue working there was that she never, ever had contact with him -it was the only way Whitney could keep the job she loved and was very good at and not tear the man’s eyes out should they ever meet.

Now, two years later, Whitney’s, Cormac’s and Daisy’s worlds were about to be turned upside down — and the magic that is Marietta, Montana might get a smidge of help from a red suited guy with a twinkle in his eye.

After a lockdown at Daisy’s school with one student shot and a teacher stepping in to take down the gunman – Cormac Sheenan decided it was time to go home.  Home to Marietta where he had family, where his daughter could be safe from the dangers of the big city… and where memories good and bad had driven him away years ago.

Cormac’s decision to return to Marietta was not just a personal choice – he was moving his entire headquarters operation to this small Montana town.  That included Whitney as well.  And she could never return to Marietta to live, too many memories.  In order to qualify for the severance package Cormac offered to those upper management employees who could not make the move, they had to work through the transition for sixty days.  Since Whitney’s job would be to get the new building set up and ready for the rest of the teams to be ready to work the beginning of the year – that meant sixty days in Marietta with Cormac and Daisy — and trying hard not to lose her head or her heart once again.

A Christmas Miracle for Daisy is such a magical, heart warming story.  Returning to Marietta, Montana is always a personal joy for me – add in Christmas and catching up with the hot-headed, loyal and tight knit Sheenan family once again, and I’ve got a slice of heaven on my e-reader.

Cormac’s personal history had him giving up on happiness with Whitney years ago.  A decision that an older, a bit wiser man now regretted for the most part.  Back then he hadn’t been ready for the forever kind of relationship.. he didn’t believe in it and didn’t trust it.  Now as a father who is seeing his adopted daughter glow under the influence of one special woman he’s beginning to question if he got it wrong back then – and how he could fix it now.

Truth is he could fix it – but being a typical Sheenan, he messed it up in his attempt to make it all right again.  But he’d learn, when the happiness of three people was on the line, he could learn real fast.

Whitney had never stopped loving Cormac.  Oh, she told herself that he was nothing to her, that he had taken away the one person in the world that she’d wanted with her forever.  But some loves never die.  They might need stirred up a bit, with some convincing, some positive actions and maybe a touch of Christmas magic.  But her love still lives, waiting for Cormac to get it through his thick skull that he’s in love too.

If you’re looking for that special, warm feeling, want to be inside the story kind of Christmas Romance – then you need to pick up A Christmas Miracle for Daisy.. right now.  A little girl who will steal your heart, a man and woman who belong together and that special Marietta Magic Christmas Dust that Kris has in huge piles – this is what Christmas Romance is all about.  Hope, Faith and Love.

*I received an e-ARC of A Christmas Miracle for Daisy from the publisher and NetGalley in exchange for an honest review. That does not change what I think of this novel.*

« COYER Back to Basics
Should’ve Said No by Tracy March »