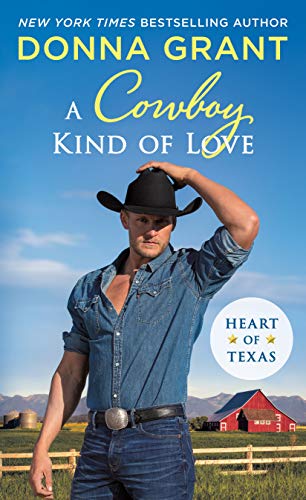 A Cowboy Kind of Love is the sixth title in the Heart of Texas series – and one I’ve been waiting for since I’ve had a definite crush on Jace from the beginning.  He’s been through so much especially in the past five years or so since Taryn up and left town with no clear explanation.  The fact that she’s not been around or in contact with him since doesn’t change how the heart feels and his heart may be broken but it still belongs to his forever love.

Taryn broke my heart, not because she left Jace but because of what she’s been through these past few years… and what she’s done and seen in that time.  She’s back in town to seek help from the one person she trusts but she’s bringing a truckload of trouble with her and nothing is going to be the same for this couple again.  A second chance?  You could say that, but also a deepening of the love that already exists, an acceptance of who they are now, and a love that still burns hot and bright in spite of the time apart.

It’s really hard to not give away possible spoilers right now for I want to talk about this book.  But, I’ll behave.  A Cowboy Kind of Love is intense, full of dangerous situations, brings us back in touch with a lot of familiar couples/characters, and brings closure to Jace’s past and a wide-open door to a happy ever after for this man and woman who so deserve it after all they’ve been through.  A bit of cowboy romance, a bit more of Romantic Suspense, and is chock-full of characters who will make your heart sing.  I had so much fun with Taryn and Jace – and if you love a really good story with danger, true love, family, and a couple to root for, then you’ll feel right at home here.  There are a few twists that I did not see coming and that is the type of story that will always grab my attention and keep it.  I certainly hope there will be more stories in the Heart of Texas series.

One response to “A Cowboy Kind of Love by Donna Grant”