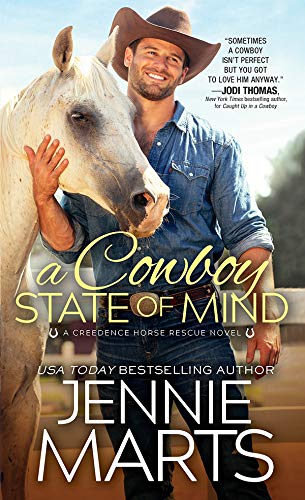 Scarred and battered loner Zane Taylor has a gift with animals, particularly horses, but he’s at a total loss when it comes to knowing how to handle women. Even though he’s sworn off love, he can’t seem to stay away from Bryn Callahan. He’s known for being a horse whisperer, but can’t seem to find his voice at all where Bryn is concerned.

Bryn Callahan has a heart for strays, but she is through trying to save damaged men. She vows to only date nice guys, which is a category that does not include Zane Taylor. Too bad he’s the only one who sets her pulse racing every time she’s around him.

Starting a horse rescue ranch wasn’t in Bryn’s plan, but try telling that to the assembly of abandoned animals that have found their way to her doorstep. And when a chance encounter with a horse headed for slaughter brings Zane and Bryn together, they find themselves given a chance to save not just the horse, but maybe each other.

‘A Cowboy State of Mind‘ begins the ‘Creedence Horse Rescue‘ series, which has a connection to ‘The Cowboys of Creedence‘ series.  I happen to be a reader who loves series with connections, it makes the world I’m stepping back into more realistic, and gives me a sense of community which always heightens my enjoyment of any series, no matter the genre.  Do you have to have read the earlier series to enjoy this one?  No, of course not.  Each is their own little world that connects to the larger universe of Creedence.  Although, if you can I would certainly recommend ‘The Cowboys of Creedence‘ for it’s an amazing series, in my opinion.  (and we may have some cameo appearances by those cowboys at some point)

I’ve fallen in love with this new series at the first book – and I expect a long term relationship with the rest of the series.  This story is so good, so realistic that it was easy to fall back into this world with Zane and Bryn.  We met them briefly in the previous series, but if you haven’t read ‘The Cowboys of Creedence‘ series do not worry – you’ve missed nothing of their background or story, simply an introduction of secondary characters at that time.

Zane has returned, reluctantly, to Creedence after his father took ill.  Why considering how awful a father he’d been and Zane still carries the physical and emotional scars, he felt that need is part of what makes Zane a far better man than the one who sired him.  Bryn is a kindhearted soul who would do anything to help anyone, human or animal, and it has cost her in the past.  She’s striving to reach a dream and it’s necessary to work double hard because of that kindness to do so, but she will, she has the guts and grits to do anything she desires.

On the surface, they may seem like an unusual couple because of their very different outlooks on life, but at their cores are good people who deserve happiness, even if Bryn has to work hard to get Zane to understand that.

I think I fell in love with the menagerie of animals that made their way, in several fashions, onto Bryn’s ranch which is turning into a Rescue Ranch almost as much as I enjoyed Zane and Bryn’s journey to a happy ending.  Almost.  I’m definitely looking forward to a return trip in March of 2021 for the release of ‘When A Cowboy Loves A Woman‘ – for more romance, of course, but hopefully running into these delightful animal characters once more as well.

I had such a good time with ‘A Cowboy State of Mind‘.  It’s realistic, believable, with characters I rooted for from the start to get their acts together and admit their attraction.  The animals were a bonus, but I definitely cried a bit at how they’d been treated before ending up at Bryn’s ranch.  This is a story that will tug at your emotions, add a few twists, intriguing secondary characters, and a love that was meant to be.  I had a blast back in Creedence and if you love a really good love story (and cowboys with animals) then you will, too.

Available in a variety of formats including for your favorite e-reader, mine is the Kindle