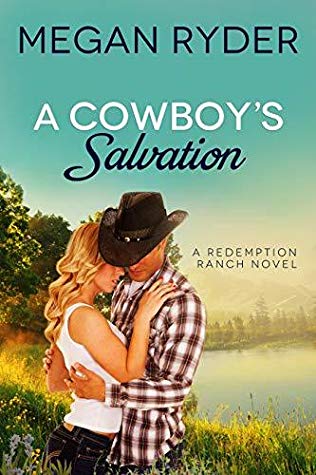 He wanted to be left in peace…

West Morgan knows all about second chances. After bouncing from foster home to foster home, he finally landed at the Rawlings Ranch as a teenager. There he found a home, something he’d never thought possible. Now an adult, he realizes he’s been given much more: a family and, most importantly, peace. But when his mentor dies and leaves the property divided among his foster brothers and his mentor’s daughter, Tara Rawlings, the fragile future he’s built for himself is threatened.

She wanted to be free of her past…

Tara Rawlings swore she’d never end up with someone like her father, a man completely focused on the ranch to the exclusion of his loved ones. She created a new life for herself in San Francisco, running an interior design company and getting married, then divorced. When she returns to settle her father’s estate, she finds that her birthright is in jeopardy. And the only way to save it is to work with West Morgan, the one man she has always resented—and always found irresistible.

Can they save the ranch without killing each other … or falling in love?

Titles in the Redemption Ranch series include – A Cowboy’s Salvation –

This series is very well named as the Redemption Ranch because it brings so many aspects of this first, world building Romance into play in the reader’s mind.  Yes, the Rawlings Ranch was indeed a place of redemption for West, and his foster brothers Chase and Ty.  But it was also the place where the owner’s daughter, Tara, felt least wanted perhaps even pushed aside as the teen boys arrived.  Unknown to Tara her father had made it abundantly clear to the boys that his daughter was off-limits and a fast ticket off of the ranch if they disobeyed him on that.  Unfortunately, her mother’s hatred for the ranch soon moved into Tara’s head as well when she was sent off to boarding school and the foster teens took on more responsibility at the ranch.  She made her life far away from home and if not happy was at least content building her company with a friend, now divorced and finding her own way in life.  All that will change in a heartbeat – and truths she never knew may change her mind on exactly where home really is.

A COWBOY’S SALVATION grabbed hold of my emotions and never let go until the ending.  And what a circle of emotions they were.  I understood where Tara and West were in their mindset about each other, yet I wish Tara could have seen the past with an adult’s eyes sooner then she might have seen why her father did some of the things that hurt her the most.  There were moments when I could have smacked West upside the head for the truly stupid decisions he made.  Watching him grovel afterward was quite satisfying.  Their attraction to each other was never in doubt since it began years ago, but they had to figure out how to overcome their past, and their preconceived ideas about that past in order to work toward a future for not only the ranch but for themselves as well.  I was easily caught up in their story and now I’m hooked on the series as I wait for Chase and Ty to find their happily ever after loves, too.  If you enjoy a Romance with layers, the couple’s past to get beyond and characters that are as real as your next door neighbors, then A COWBOY’S SALVATION is a book you’ll want to pick up – soon.

« One Night of Temptation by Darcy Burke
The Turn of a Wheel by Amelia C. Adams »