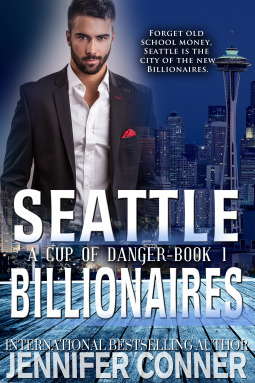 With her husband Martin’s billion dollar Seattle lifestyle, Livia Kane has everything she could ever dream of: houses, cars, jewelry, and clothes. Everything, but love. In the past seventeen years, has Martin ever loved her?

Martin is willing to do anything to keep his company, SIP, in a chase with the 85-billion-dollar coffee market. When he turns violent Liv is forced into Calen’s arms for help.

Sometimes, you must give up everything to get everything you’ve always wanted.

Titles in the Seattle Billionaires series includes:  A Cup of Danger –

Martin Kane is a despicable piece of trash.  A liar, a thief, an adulterous husband, a violent temper and a firm belief in his own godhead.  There is absolutely nothing redeemable abut this man.  And that is only the beginning.

Over the years of her marriage Liv has had the rose colored glasses rudely ripped off and she sees her husband for exactly what he is.  Trapped in an unhappy marriage she really sees no way out since Martin has no desire to let her go free.  And what Martin wants Martin gets, one way or the other.  This time he’s gone too far when he hit Liv, and she has someone to turn to.  It’s time to take back her own life.

Calen traveled from his homeland of Ireland in hopes of making a deal with one of the most successful coffee businesses around.  It turns out that the owner wants to take over the company not simply purchase their famous tea.  To further complicate matters Calen is attracted to Liv and sees what a desperate situation she is in.

A Cup of Danger is a dark Romantic Suspense story.  It’s full of danger, intrigue, double crossing, and just abut any nasty thing you could possibly think of.  Martin Kane is not a nice man, and he doesn’t intend to lose – ever.  Look for shenanigans and showdowns as several plot twists and turns bring about an ending that is satisfying yet has a touch of a cliffhanger.  Mystery and Romantic Suspense readers would enjoy this one.