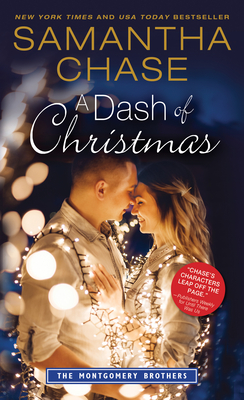 Carter Montgomery broke the family mold when he went to culinary school. Now a successful restauranteur, he’s at a crossroads: should he continue on his successful path or look for a new challenge? What he needs is time alone to think things through. But his matchmaking family has other ideas…

Emery Monaghan’s no-good fiancé has embroiled her in scandal and she needs a way out. When mentor Eliza Montgomery offers her a place to recoup, perhaps hide, she’s relieved―until she realizes that the deal means rubbing elbows with Eliza’s son Carter―Emery’s childhood nemesis.

Titles in the Montgomery Brothers series include — Wait For Me – Trust In Me – Stay With Me – More of Me (#3.5)– Return to You – Meant for You – I’ll Be There – Until There Was Us – Suddenly Mine – A Dash of Christmas

It’s always a bittersweet moment when I come to the final book in any series and A DASH OF CHRISTMAS, the 9th story in The Montgomery Brothers series has arrived.  I’m going to miss this extended family full of love, laughter, heartache, and healing.  Yet, as so often happens, the best of them all did come last as we not only get a complicated love story with Carter and Emery, we also got to catch up a bit with all the members of this family that I’ve had amazing adventures with over the years.

Carter and Emery have known each other forever it seems, and been rivals just about that long as well.  Now all grown up both have gone their own ways to lives that have gotten complex over time.  Carter has succeeded at his love of food by becoming a restauranteur with a thriving business doing what he loves yet feels it’s time to move on to another challenge – he’s just not sure what yet.  Emery thought she had her life mapped out until it all fell to pieces at her feet.  Now she’s looking for space, trying to escape the publicity brought about by her cheating ex.  They both end up in New York City, working on a project that matters – and as usual, their rivalry plays a large part in their time together.  Only this time something is different, they’re seeing the people they’ve grown into and as attraction flares so do tempers at times.  They just might be perfect for each other – they just have to survive the courtship and dodge fiery banter and sort of intended insults to get to that happy ending.

I read A DASH OF CHRISTMAS with a satisfied smile on my face most of the time.  Emery and Carter certainly do strike sparks off of each other, and watching them fight falling in love was an amusing, banter-filled journey.  I had such fun with their story and loved seeing old book friends, couples and family that I’ve met throughout this series once again.  They all will be missed – but what a ride it was.