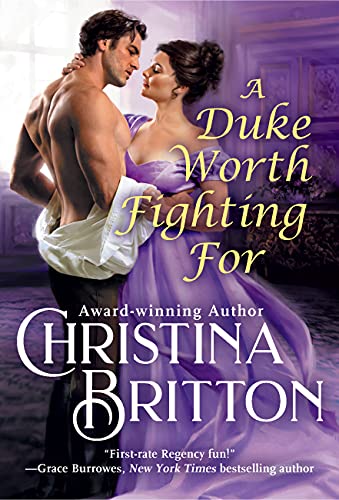 Daniel Hayle, Duke of Carlisle, returned from Waterloo a hero, and he has the wounds to prove it. But he dreads the coming London season as he never did the battlefield, where his lack of social skills is certain to make it difficult to find a wife. What he needs is someone to help him practice socializing with the ton. Someone who isn’t frightened away by his scars . . .

Margery Kitteridge is still mourning the loss of her husband. So when she receives a blackmail letter accusing him of desertion, she’s desperate to protect his reputation. The answer to her troubles appears in the form of a damaged, reclusive—and much-too-desirable—duke in need of a wife. She proposes an alliance: she’ll help him find a bride, in return for the money to pay off the blackmailer. But working so closely together awakens passions they never imagined possible, and reveals secrets that might tear them apart.

A Duke Worth Fighting For is the third title in the Isle of Synne series, and brings together two people who never expected to find love along with a dangerous situation to be dealt with… together.  This has been a series that I’ve enjoyed, and it’s always a bit bittersweet when I know I’m reading the concluding story – it’s not always easy to say goodbye to characters who have given me emotional journeys.  And, thankfully, we get to catch up a bit with all of the heroines and heroes from Isle of Synne.

Daniel Hayle, Duke of Carlisle never expected to have the responsibilities of that title.  But the death of his brother has brought the spotlight squarely on him… a socially awkward man, one who has known betrayal and continues to hold on to the internal and external scars of war.  He knows that he’s no prize, but he must secure his heritage before a slimy piece of trash tries to get his hands on the title and the estate.  Yet, Daniel has no clue how to get on with the females he’ll need to encounter and eventually convince that being a Duchess is worth putting up with him.  He needs help, and that will come in the unexpected encounter with Margery Kitteridge.

Margery is still in love with her husband, even four years after his death at Waterloo.  Now she’s being blackmailed by some scoundrel claiming that the man she loved was a deserter and for a huge amount of money they would conveniently forget about the positive proof in their possession.  Not for one second does she believe this outrageous claim, and she’ll do anything to protect her husband’s good name.  Even marry for convenience, help, and support… all that and more could be found with one man, Daniel.

Neither ever thought that their marriage would turn into a love match.  And they have a long way to go to get to that emotional conclusion – but what an emotional adventure they’ll have before they acknowledge their real feelings for each other, and uncover a blackmailer.

I enjoyed A Duke Worth Fighting For, and loved Daniel and Margery individually, and definitely as a couple.  There are a few delightful surprises within their romance, some that gave me a chuckle, others that had me in tears.  Daniel is a good man, an unusual one as well.  Watching him become confident in his relationship with Margery was so engaging.  They will have a bumpy road before they finally admit to how important they are to each other, both have some growth, even some attitude changes in store.  But I loved their romance as it felt realistic, steamy, and romantic throughout.  I enjoy seeing two people who at first I’d thought could never pull off being romantic with each other and then watch them prove me wrong.  I had fun here, and would definitely recommend not only this story but the entire series.