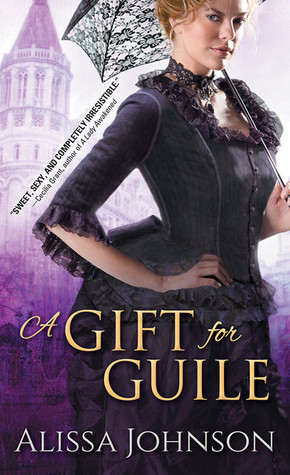 A Gift For Guile is an intriguing and funny combination of a former thief with a former police officer.  On the surface it may seem that no two opposites could ever be found, but Samuel and Esther soon come into their own.  And it won’t take long before the reader is cheering them on, and perhaps cringing a bit as Samuel once again puts his foot firmly in his mouth.  Poor guy.

At one time Esther was an accomplice in her father’s criminal activities.  The fact that she has an unusual talent with knives and could spin a tale that the angels would swear by came in mighty handy back in the day.  Yet, time passes and people grow up and regret what they once did.  This is where Esther is right now – trying to make amends for her actions in the past.  It won’t be easy, and she’ll encounter a lot more trouble than she ever thought possible in her mission.  Still, she is determined and no one will stop her, especially not a bumbling knight in shining armor who would rather protect her wrapped in thick cotton than let her be harmed by her quest to put things right.

Samuel is often exasperated by Esther, yet he is also unexpectedly attracted to this minx as well.  He’s a former officer of Scotland Yard, and a damned good private detective in his own rights – yet, around this lady he’s all fumbles, and all the wrong words seem to flow out of his mouth.  Quite annoying, and unlike him usually.  When Esther is in danger, Samuel is right there to see to her safety.  Eventually they will solve the mystery that surrounds her plan for redemption, but she’s not going to make any of this easy on him.

I think most of us can identify with Esther on some level.  Oh, not that we’ve done what she did in her past, but haven’t we all done stupid things that we wish could be made up for now that we’re older and hopefully wiser?  Throughout A Gift For Guile we are aware of Esther’s opinion of herself, and it’s not a very good one.  She’s never been “good enough” for anyone, she’s always been the temporary person who can easily be pushed aside when the need is gone.  A major enjoyment for me in this story is how slowly but surely Esther begins to see herself as just as good as anyone else and worth being someone special to a person who likes her exactly as she is.  For her Samuel is that person, she simply needs to let him in so he can prove it to her.  Trust is not an easy thing, but with it so much more is possible.

With entertaining banter, a couple who actually talks to each other about problems and how to resolve them (gasp), a mystery to be solved and wrongs to be set right, A Gift For Guile is a delightful journey.  I would recommend this one for any Romance reader who enjoys a touch of mystery and danger with their romance.

*I received an e-ARC of A Gift For Guile from the publisher, Sourcebooks Casablanca and NetGalley in exchange for an honest review.  That does not change what I think of this novel.*

Tags: A Gift For Guile, Alissa Johnson, The Thief-takers #2