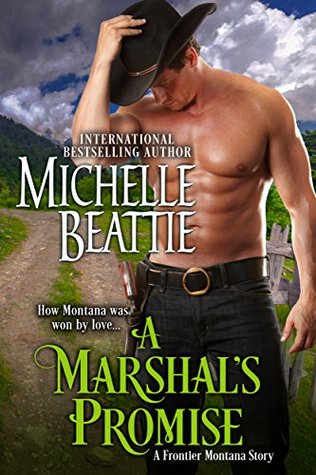 I’m going to miss this series, in fact I can see a re-read of it in my near future.  The chance to step into the frontier town that is one of my favorite modern day fictional locations was priceless and completely enjoyable.  A Marshal’s Promise delivered a touching love story with touches of danger and mystery – and brought back some well loved characters as well.  I always hope that there will be more stories for any loved series, and if this is truly the last I’ll be content – but one can always dream of more, right?

Paige is defending her ranch the only way she knows how… with a gun and gumption.  It’s too bad that the man she did shoot wasn’t the bad guy she thought he was but a U.S. Marshal instead.  Now she’s really done it.  But Logan isn’t about to arrest her, he’s more inclined to hang around and help put an end to the threats she’s been facing as others try to come in and take what is lawfully hers.  Neither expected to find love during this fight but the heart knows when it’s found the perfect match.  Logan and Paige have issues to be dealt with, a mystery to solve, nasty villains to put down and a life together to plan.  Sometimes the thing we need the most is right in front of us, and for this couple that would be each other and a love to last a lifetime on the frontier.

If you love Western Historical Romance, especially with a bit of steam added, then you’d enjoy A Marshal’s Promise and the entire Frontier Montana series.  I’d definitely recommend these stories of strong men and women who faced down the dangers of a growing country and found love along the journey.  Yeah, I’m gonna miss this series, that’s for sure.

« Arden by Melody Anne
One for the Rogue by Manda Collins »