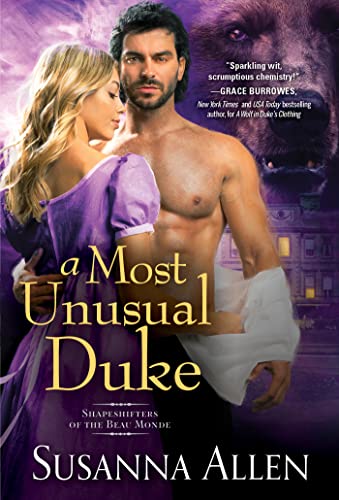 The Prince Regent insists his cousin and fellow bear shifter Arthur Humphries, the Duke of Osborn, take a mate to ensure the continuation of their species. After all, Arthur is an Alpha, so he must set a good example. The duke would very much prefer to continue his comfortable bachelor lifestyle, but the Prince Regent is not a bear to be poked.

Beatrice, the widowed Marchioness of Castleton, is in possession of a powerful secret. She knows all about Shifters, her horrible late husband being one of them. At any moment, Beatrice could reveal the secrets of the Prince and those like him—unless the Prince can make sure she marries another Shifter.

A marriage between the Duke of Osborn and Beatrice is far from ideal for either one, but at least they won’t fall in love…right?

A Most Unusual Duke continues the Shapeshifters of the Beau Monde series with a delightful tale of one confirmed bachelor bear shifter, who happens to be a man of power and one widowed completely human woman who knows far too well (and too much) about the shifters among the ton, having been married to an odious, nasty wolf shifter.  Arthur and Beatrice are being, well, somewhat blackmailed into marriage by the Prince Regent – and everyone knows very well, you never even try to say no to the Prince.

I’ve loved the combination of two of my favorite genres, Shifter Romance and Historical Romance, in this series.  It’s such fun to imagine shifters running around Regency London, unknown to most prissy gossipmongers among the ton, what a tale that would have been to spread about!  Beatrice has suffered at the hands of her former husband, and she isn’t about to give up her freedom easily into the hands of another man, another shifter.  Yet, this lady of ice has little choice in the matter and it was fascinating to watch Beatrice lose the shield she’s hidden behind for so long as Arthur works his way into her life and her heart.  Arthur has a heartbreaking history, and it’s completely understandable why he would hesitate to take on the role of Alpha.  But again, his Prince has given him little choice.  I think I enjoyed Arthur’s transformation the most for he had a lot of baggage to drop in order to open himself up to what a true marriage of love could be with Beatrice.

Combine their growing attraction with intriguing secondary characters (who I hope we see more of in the future), a bit of danger, the unique world of the ton, and pasts that all too often get in the way of their developing love for each other and you have a fascinating Paranormal Historical Romance to devour and enjoy.  I had fun with A Most Unusual Duke, and am looking forward to what comes next in A Duke at the Door.

Available in a variety of formats including print or e-reader