A Murderous Tangle by Sally Goldenbaum 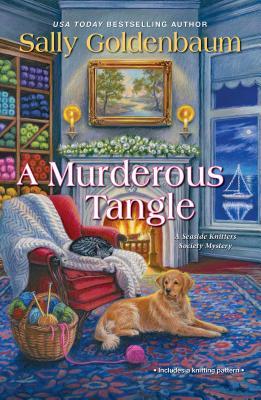 Birdie, Nell, Cass, and Izzy are prepping their coziest handiwork for a holiday gathering in Sea Harbor, Massachusetts. But as murder makes waves in their tightly knit coastal village, can the Seaside Knitters prevent a deadly trend from catching on?

While the Seaside Knitters get ready to showcase their new Danish-inspired event, locals can’t stop talking about Tess Bean–a bright-eyed environmental activist with a way of charming both animals and humans alike. Birdie’s granddaughter is mesmerized by ethereal Tess’s passion for saving the earth and ocean, and even Izzy’s old Irish setter becomes attached to the young woman’s gentle touch.

Except not everyone is a fan of Tess and her strong opinions, especially after she starts questioning the “clean” practices of small-business owners. So when a popular bar owner whom Tess publicly calls out for bad practices is found dead from a fall off his club’s deck, it’s not long before she tops the suspect list for murder.

In addition to a murderer walking their streets, the knitters are also grappling with an unusual wave of thefts up and down Harbor Road. Now, as Birdie’s granddaughter struggles to protect her mentor’s reputation, the Seaside Knitters must solve a dangerous mystery that not only threatens to unravel the fabric of their community and the approaching holiday, but also the lives of those they care about the most.

A MURDEROUS TANGLE is my first step into Ms. Goldenbaum’s world – and I will definitely be grabbing the two earlier titles that I missed to get caught up.  There are a lot of characters in this story, yet I never felt lost and, in fact, soon became very comfortable with this small town, as well as its unique and at times quirky residents.

I loved the way this story played out at a comfortable pace, with some deep thinking, some emotions, and a lot of logical conclusions based on reality, not on the heat of the moment.  There are red herrings and a few twists, turns and surprises – I expect that in a Cozy Mystery but I didn’t catch the bad guy until the reveal.  Well, I don’t actually try to solve any mystery I’m more entertained by those twists and surprises along the journey.  I love the friendships within this world, that is a huge part of what makes any story (for me) believable and relatable.  In all, I had a really good time with A MURDEROUS TANGLE and would recommend this one to any reader who loves solving puzzles, small-town antics, real believable friendships and figuring out whodunit.