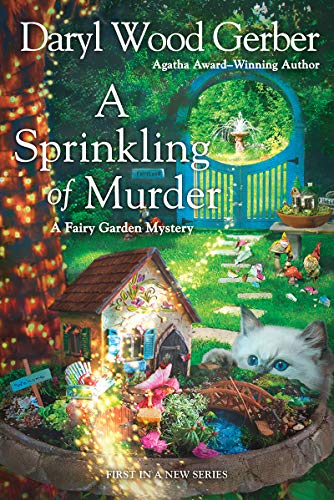 ‘A Sprinkling of Murder‘ begins the new ‘Fairy Garden Mystery‘ series with an intriguing, fun, and enjoyable introduction to this world.  I’ll admit that I was hooked on this world early on and I can already say that I’ll be following this series for as long as it runs.  A touch of Paranormal, lots of Cozy Mystery to solve – why wouldn’t a Mystery lover devour this new series?  I certainly plan to.

There was a time when Courtney believed in the magic of fairies, could even see and converse with them.  Yet, that all disappeared when her mother died when Courtney was about 10 and she moved onto what everyone else considers the ‘real world’ of facts, realities, and no more magical moments in the garden with the fairies.

Until… as she approached her thirties suddenly she was seeing the fairy world once again.  Perhaps it was when she opened her fairy garden shop ‘Open Your Imagination’ that the magic flowed once more.  How doesn’t really matter – the timing couldn’t be more perfect for the fairy that Courtney once spoke with returns with a message that trouble is on the way… and it certainly was when a dead body is found at her garden shop.  And Courtney is the main murder suspect.  Time to do some sleuthing of her own in order to prove her innocence – but not everything or everyone is as they seem, for among this community a murderer lurks, and it isn’t Courtney.

I try not to give away spoilers in any review but I’m especially vague on Cozy Mysteries or Paranormal Mysteries titles.  ‘A Sprinkling of Murder‘ was such a delightful introduction into this world.  First, I love anything with a touch of the Paranormal, Second I also love and have created fairy gardens so that’s another plus, and Third I simply love a really good mystery in a world that is well-built with interesting characters to meet, interact with and suspect of foul deeds over the length of the book.  I found all of that and more in ‘A Sprinkling of Murder‘.

There is definitely world-building here, there has to be at the start of a new series, a new world.  I liked Fiona, she’s rough around the edges as a fairy, but I did like her and look forward to more in the future.  The murder victim wasn’t entirely liked by the community but shifting through the numerous suspects we meet, tossing out this one and that one was a fun time for me.  With a few twists, and delightful new world, and intriguing characters I fell in love with this story and would definitely recommend it.  The next title is due out in March of 2021 – a long time to wait, but I’ve no doubt that the end result will be well worth it.