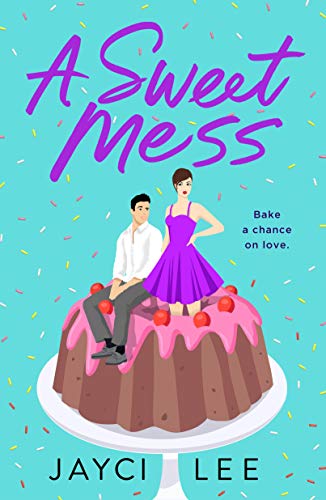 Bake a chance on love.

Aubrey Choi loves living in her small town nestled in the foothills of California, running her highly successful bakery away from the watch of her strict Korean parents. When a cake mix-up and a harsh review threaten all of her hard work and her livelihood, she never thought the jaded food critic would turn out to be her one-night stand. And she sure as hell never thought she’d see her gorgeous Korean unicorn again. But when Landon Kim waltzes into her bakery trying to clean up the mess he had a huge hand in making, Aubrey is torn between throwing and hearing him out.

When she hears his plan to help save her business, Aubrey knows that spending three weeks in California wine country working with Landon is a sure recipe for disaster. Her head is telling her to take the chance to save her bakery while her heart—and her hormones—are at war on whether to give him a second chance. And it just so happens that Landon’s meddling friends want them to spend those three weeks as close as possible…by sharing a villa.

When things start heating up, both in and out of the kitchen, Aubrey will have to make a choice—to stick it out or risk her heart.

‘A Sweet Mess‘ captured my imagination from the start, and while I did have some questions, maybe issues with parts of the book, that didn’t take away from the overall enjoyment factor of one mistake, one scathing review, and two people discovering that love happens when it feels like it, fast or slow, there is no denying when attraction turns into so much more.

Landon’s flat tire brought him to Aubrey’s bakery – and to that mistake of the wrong cake being served to a food critic.  And maybe because he’d had a crap day so far that (unknown to him) mistake earned a cutting review from this well-known food critic that practically ruins Aubrey’s pride and joy – her bakery.  Then to add fuel to an already explosive situation they manage to meet at a local bar, have sparks fly, and a one time, one unbelievably sensuous night together before they discover exactly who the other is.  Awkward, to say the least.  And each has their own idea of why and how that one night came to be… which, of course, were the wrong ideas.

Although Landon does realize his mistake, he cannot do a second review to make up for his part in the troubles Aubrey faces with her business now.  But… he can and does offer her the chance of a lifetime to take part in a reality show that would make her a household name… should she do well.

And the rest — well, you’ll need to discover for yourself.

I had fun with ‘A Sweet Mess‘, for the most part, and since I read an e-ARC I don’t know (yet) if those things that kept this from being a total winner for me have been edited.  Yet, in the end, it really is a good book with a delightfully wicked sense of humor and characters who come across as real with their own issues that connect in unusual circumstances.

To be frank, I do wish the cover had been different, perhaps real people for from that cover no one can instantly tell that this is a Korean couple.  I’ve read this author before and that book (and the next one out) is beyond sexy with real people and conveyed so much about the couple just by the picture… I wish this book had that type of cover – it’s an opinion, obviously, but then any review is just an opinion as well.  I’d recommend ‘A Sweet Mess’ for those who love Rom-Com and a good love story to give this one a try.  It’s a good romance, one you don’t want to miss.

**as an addition after this review had been written**  I did learn last night through the author’s Twitter that “A Sweet Mess” has been picked up as a movie!  Which is beyond exciting for the author, I’m sure.  I will watch that movie, for it will be fascinating to see how the written word is transformed by the digital camera into breathing people and facial expressions.  Looking forward to that.

Available in paperback, audio, or your favorite e-reader (mine is the Kindle)