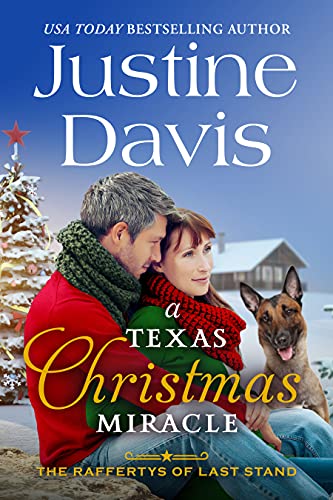 A Texas Christmas Miracle continues The Raffertys of Last Stand series with a heartbreaking and heartwarming story of two people who are dealing with their pasts in different ways and one amazing dog who will bring them together to find peace and love… finally.

When the phrase “wounded soldier” is spoken we first think of the men and women who have risked their lives for the good of their country.  Yet there is another soldier, the four-footed kind who also risk their lives to do the bidding of their handlers, their partners, their “pack” of one human who means the world to them.  Atlas or rather now Tri is one of those canine soldiers who risked everything and in Tri’s case lost not only his human but then was injured with another assigned handler and ended up an amputee who found his way to Chance’s rehabilitation/retraining program.

Chance returned from duty a changed man.  He focuses on the dogs he takes in, that’s his purpose in life now.  The happy-go-lucky man that his family and his community once knew no longer exists.  And Chance would love nothing more than being left totally alone with his dogs.  Yet another person with an equally strong purpose isn’t about to let that happen.

Ariel’s husband’s death still lives every moment of every day with her.  Christmas time is the worst.  But she’s learned of his canine partner’s injury and release from duty and is determined to adopt Tri at any cost.  Neither expected Tri’s immediate connection with Ariel… or the emotions that working with Tri would bring out in them.  Guilt is a powerful emotion, and beginning to have feelings for another man is bringing out all the guilt possible in Ariel.  While she’s fighting to learn how to help Tri she’s also learning how to deal with falling for Chance.

A Texas Christmas Miracle is emotional, so well written, and brings to life real issues and situations that melted my heart, brought out a few tears, and left me with a satisfying ending for two deserving of happiness humans and one very special dog.  If you love a good romance that wraps itself around your heart, then this story and this series would be perfect for you.