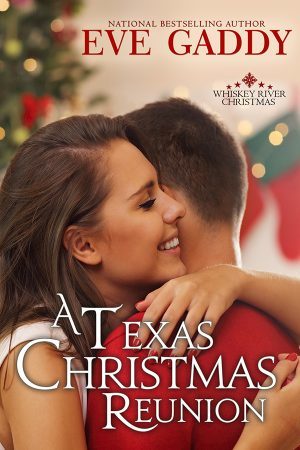 Years ago, Harlan Sullivan broke Savannah Taylor’s heart. Now, he’s back in Whiskey River as the new owner of the local construction company–and Savannah’s new boss. Giving up Savannah was the hardest thing Harlan ever had to do, but it’s way past time to explain why he did. Besides, after fourteen years, they have both moved on. Or so he thinks—until their unexpected meeting at Felicity’s Christmas Ball shocks him into realizing his buried feelings—and secret passion—are very much alive.

As long as she keeps a tight grip over her emotions, Savannah is confident she can weather having her old flame become her new boss. She’s even willing to indulge the desire that time seems to have intensified. But there’s no way she will let Harlan anywhere close to her heart.

Harlan soon realizes he wants more from the sexy, sultry Savannah than a temporary affair and sets out to convince her that this time, their love will last forever. But it will take a bit of Christmas magic from the Harwood Inn ghost to bring this reluctant banker’s daughter and determined Barrels Bad Boy to their happily-ever-after.

A Texas Christmas Reunion was such a fun story for the Christmas season.  Full of the magic of a small town celebration, traditions and close knit community  Once again Felicity has the chance to help another couple find their way back to each other.  I do believe Felicity is my favorite matchmaking ghost..

Harlan is back in town, and he’s not back as the poor boy from the Barrels this time.  He’s bought the construction company that Savannah works at, and if the Ferrari he now drives is any indication – Harlan is doing quite well in the world these days.  A successful businessman, Harlan is back in Whiskey River to work with his friends on a variety of projects.  Discovering Savannah is still here and very much an important part of the business he just purchased is perhaps a plus, or perhaps a mistake, only time and Savannah’s reactions will tell.  Oh, Harlan and Savannah have a history… unfortunately, a history that left them both brokenhearted for different reasons.  Now Harlan’s grown up with his own power to wield, and he’s not backing down from her pompous father ever again.  He broke her heart once, now can he win it back again when she finally knows why he left her in the first place.  It’s not going to be easy, but Savannah is worth the fight, he doesn’t want to fight dirty but he will if pushed.  Can one matchmaking Christmas ghost help these two see the truth about their love?

It’s such fun to be back in Whiskey River again.  If you followed the original Whiskey River series then you’ll be glad to know that the familiar faces and places are still here, even though the town is growing like a wild weed.  Harlan and the other men in the modern day portion of the Whiskey River Christmas series will have something to do about the town’s growth.

Harlan and Savannah make a compelling couple.  They had a true love that was torn from them to now have a second chance at the happiness of a lifetime that they were denied.  Would they be the people they are today without those events, hard to know.  But they fit so well together that it is no hardship to cheer them on to their happy ending especially when things look bleak.  I enjoyed this story so much and I’d highly recommend it for any Romance reader who enjoys a solid story, a loathsome villain even if he is family, a couple who make magic happen and secondary characters that bring this story, and soon their own, alive.