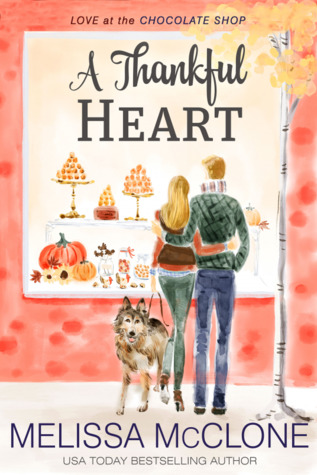 Chocolate is better than men, and so are dogs. At least, that’s what Dakota Parker tells herself as she mends her broken heart and finds forever homes for rescue animals. So far, so good. She can indulge her love of chocolate where she works while her foster dogs provide her with the unconditional love she craves. What more does she need?

Seattle architect Bryce Grayson is counting the days until he can return home to the big city with his father in tow. That is if he can convince his dad to leave Montana. Bryce’s escape plan, however, goes astray when he meets Dakota. Her sweet kisses put the chocolate she sells to shame. Maybe he should be the one to move to Marietta, but could he be happy living in such a small town?

He has until Thanksgiving to decide.

Read on for my thoughts on A Thankful Heart.  No true spoilers, promise.

I think this the first time I have not fallen totally in love with one of Melissa McClone’s heroes immediately.  Not that he isn’t fine… he certainly is a handsome, successful man.  He is also stubborn, bullheaded, has no filter on his thoughts when upset and won’t see reality for what it is because, of course, it’s his way or the highway.  Bryce will soften in time, oh, he’s always going to be stubborn and opinionated, but hopefully Dakota’s influence will smooth out some rough edges.  You might think that I don’t like Bryce, truth is I adore the man when he’s being natural and not sticking his foot in his  mouth.  But I know guys like Bryce, and I’m sure you do too.  Men who are so convinced that they are right that they tend to bulldoze over anyone else’s opinion or needs.  Not bad, simply so very frustrating.  The reality of Bryce’s ways is covered in guilt, fear and a reluctance to put anyone’s needs before his own.  Our hero has a bit of growing up to do, and the love offered by a good woman like Dakota will make a huge difference in this man.

Dakota is definitely of the opinion that chocolate and dogs are so much better than men.  And she certainly has the history to back up that opinion.  Being  jilted at the alter and having to be the one to tell friends and relatives that the wedding isn’t going to happen since the jerk is on the way outta town to his new love will do that to a woman.  Dakota has devoted herself to the local animal shelter’s residents.  She often fosters pets and right now has two dogs and a rat living with her in her large Victorian home.  Between her part time job at Copper Mountain Chocolates and volunteering most of her life to the shelter, Dakota’s life is pretty full.  When a stranger with city slicker written all over him stops in the chocolate shop – and declares he doesn’t like chocolate but buys a bag full, Dakota’s interest in peaked.  When she meets him again later at her friend Walt’s house she isn’t totally surprised to realize that Bryce is her friends son.  But it doesn’t take long for Bryce to say something totally rude to change Dakota’s bright opinion of him.  Why do most men have to be jerks?

Bryce is in Marietta for the month of November to care for his father, who has broken both legs in a fall at a construction site, and to convince… no tell… his father that he’s moving back to Seattle with Bryce.  Walt has no intention of leaving this small town he’s come to love, and instead of fighting Bryce simply goes about his life.  When a water pipe break threatens the animals at the shelter Dakota and Bryce are tossed together, often by Walt’s matchmaking.  Between finding homes for the animals, falling a bit in love with a stubborn man and coming to grips with the reality of Bryce leaving soon, Dakota has to decide if loving this stubborn man is worth the risk of heartache to come – or if a basically good man can change his opinions and stay.

I enjoyed A Thankful Heart very much.  Adored Walt, loved Dakota, liked Bryce and the animals stole my heart in a second.  The background thread woven into the first story continues to build with an interesting development.  Dakota and Bryce are going to face some difficult moments on their way to happiness.  Dakota has to learn to trust again.  And Bryce – sigh – he has to face his fears and guilt, and move on to a future that holds happiness if he’d only see it as reality, one that can be everything he dreamed of.

« Goodbye My Sweet Charlie
Christmas Kisses by Alison May »