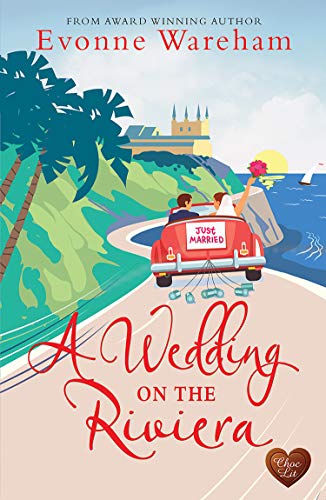 “A Wedding on the Riviera” continues the “Riviera” series with a fast-paced, funny, charming story that captured my attention on the first page and held me in its grip until the end.  Although you could read this story as a stand-alone title, it does bring back characters from “Summer in San Remo” as secondary characters.  This story is not Jake and Cassie’s but they do play a part in the antics, danger, and just plain fun going on with Ryan as the focus this time around.  I would suggest also picking up “Summer in San Remo“, if you can, and getting all the juicy details of these engaging romances.

Nadine and Ryan are heading to a wedding, so are friends, Cassie and Jake.  When Ryan recognizes the groom, chaos rules because this guy is a nasty piece of work who steals money, ruins lives, and breaks innocent hearts without a thought or care as he dashes from the altar with all the woman’s money firmly in his grasp.  These four friends are not going to let that happen to Nadine’s friend, so a plot is hatched to catch this scum… and it involves another sort of wedding plan.

Usually, Nadine, a wealthy widow, and businesswoman would hire Ryan as her plus-one at events, yet over time, their relationship has moved from friendly to having emotional feelings for each other – falling in love wasn’t part of the plan, but love rarely pays attention to anyone’s plan.  In order to get this criminal to go after Nadine (as bait) in order for this group to capture him and hand him over to the police, Ryan is going to have to watch the woman he’s falling for placed in danger and be with another man who cares little for the women he encounters and steals from.  There is danger in this plan but everyone is willing to go forward with it.

“A Wedding on the Riviera” is a delightful experience combining danger, romance, friendship, and all these beautiful locations into a story that you will want to devour… but savor it, it’s worth the time for a leisurely read to enjoy all the details.  I loved watching Nadine and Ryan falling in love, taking the risks that loving someone involves.  There is definite steam between them, but the friendship and the love are just as real as their chemistry.  It was great fun catching up with Cassie and Jake again… I’m hoping for another story in this world one day soon.  I had such fun back in this world, and I’m betting you would, too.

*I received an e-ARC of this novel from the publisher, Choc Lit/Ruby Fiction. That does not change what I think of this story.  It is my choice to leave a review giving my personal opinion about this book.*