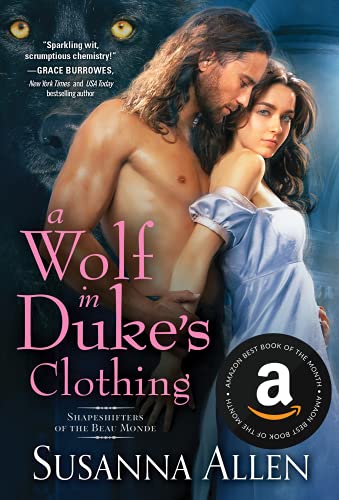 A Wolf in Duke’s Clothing begins the Shapeshifters of the Beau Monde series with a fascinating tale of shifters in Regency England blending in as well as they can and searching for their unique to them life mate.

Alfred, the Duke of Lowell, has finally found the woman he is destined to share his life with – but a complication arises in that Felicity is very human, and very much not interested in him, marrying anyone, especially since she is intending to remain unwed until at least her 25th birthday when she will inherit a sizeable sum from her deceased father’s estate.  Felicity’s passion is horse breeding, a profession not considered at all ladylike but she cares little for the ton’s opinion only her horses matter to her.  She needs to be able to inherit those funds in order to fulfill her lifelong dream – and no male, not a sleazy uncle nor nasty cousins, or even a handsome Duke will change her mind.  Right until Alfred takes that possibility away from her by staging a kidnapping that will save him and his pack from a curse as well as bringing his lifemate home to his territory.

Reputation ruined, angry beyond words at Alfred, is it any wonder that Felicity is fighting him and his plans of so-called love and life commitments by any means available?  Watching how this “Beast” wins over his “Beauty” was a fun experience.  While I enjoyed the basic story (and want to know more in the next addition to the series) there were some parts where I could have enjoyed a faster pace to the story.  It was certainly entertaining to see Alfred try his best to win over his lady, even his bumbling completely non-smooth moves brought a smile as I was reading.  He tried so hard, but he truly is rather clueless when it comes to wooing his mate.

I enjoyed meeting the members of Alfred’s pack, and I’m definitely looking forward to learning more about them through their own stories.  In all, I enjoyed myself and will be back for more in the Shapeshifters of the Beau Monde series.