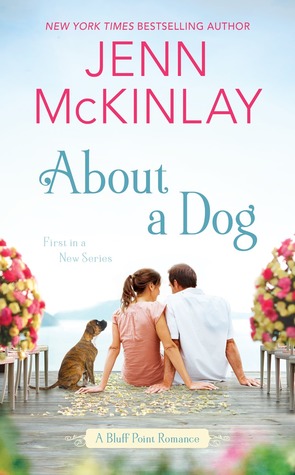 (When I first bought this book I fell in love with the cover description. Then life happened and it ended up on my TBR Pile. No more – it’s time to get that pile of books some reading time!)

Mackenzie was back home again, reluctantly, after more years than she’d care to count – but of course, she knows the exact moment she was jilted at the altar she simply prefers to not think about that if at all possible.  Or about the man who offered her comfort at the worst moment of her life.  This return home was temporary, as part of the bridal party for a friend Mac intended to be in and out of town with as little fuss, minimum contact, and on the road back to her now boring but not here life.  The thing about intentions… they don’t always follow the plan.

ABOUT A DOG is Jenn McKinlay’s debut novel in the Contemporary Romance genre, although you may know her from her Cozy Mysteries.  I was easily swept up in this story.  Mac and Gavin dance around each other, there are some stumbling blocks to avoid, and there is real affection on both sides.  But Mac has to believe that she’s good enough and that Gavin really does mean forever before she’s willing to take the risk of falling in love completely.  Like we can stop ourselves from falling in love on demand.

I adored Tulip, one sweet pup who stole every single scene possible.  Two adorable, if quirky aunts getting up to mischief is an added enjoyment.  Yet the power here is in Gavin’s love for Mac.  He’ll do whatever it takes to convince her that he’s worth the risk of her trust and her love.  If you love a romance with a few roadblocks and watching two people who obviously are right for each other work their way to that happy ending, then you’ll want to pick up ABOUT A DOG, the first story in the Bluff Point series.

I own a Kindle edition of ABOUT A DOG.