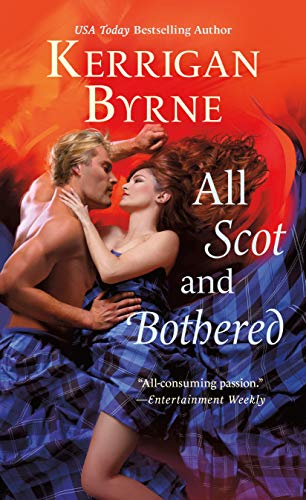 All Scot and Bothered is the second title in the Devil You Know series, and it certainly swept me off my feet and into a sensuous, funny, intriguing romance.

Everything you really need to know can be found in the cover description of All Scot and Bothered.  What you won’t find there are the emotions this story will bring out in you – anger at times, sadness at other times, laughter at the bantering, annoyance at the shaming moments, and complete bafflement at certain actions by both Cecelia or Cassius.  Add to that the sexy steaminess that just pours from these two and you find a funny, sexy, involved romance with a lot of unknowns or outside influences taking place.

I do have to admit that as much as I enjoyed this romance there were moments of inconsistencies with the actions of characters.  I went past it, but I did stop a few times and think, “They did what?!”

I enjoyed the times with Cecelia’s friends the Red Rogues, although they came very close to ousting themselves – close call.  I liked Cassius, he’s rough, opinionated, always right (at least in his mind), but when faced with a woman who meets all of his desires then he can turn into mush (for a bit) – but he’s always a proud man, and definitely one sexy man.  I adored Cecelia for many reasons but probably mostly because she is secure in who she is a curvy, voluptuous woman, she might question other’s reactions to her but she knows her own worth (most of the time).  She’s trying desperately to walk in two far different worlds all the while falling in love with the one man who could ruin her life.  I liked her, but I loved them together.

In all, I had a good time with All Scot and Bothered, and I’m definitely looking forward to the next story in the Devil You Know series.

Available in paperback, audio, or for your favorite e-reader