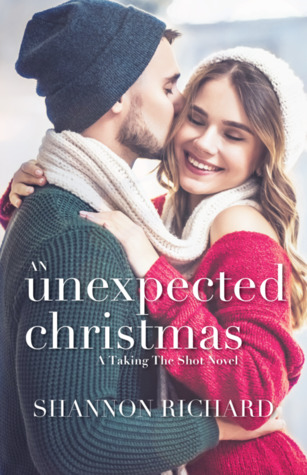 Adele James’s favorite time of year has always been Christmas, but this year she’s in no mood for the holiday season. Thanks to her famous A-list actor boyfriend cheating on her! Now that her photo is splashed all over TV, the internet, and tabloids her number one goal is to get away. She heads to her family’s cabin to be alone, but there’s another occupant when she arrives: none other than the frustratingly sexy Jace Kilpatrick… the man she’s been avoiding falling in love with for the past six years.

Jace Kilpatrick has never been the biggest holiday guy, and after three months of the NHL being on lockout, celebrating is low on his priority list. Getting the keys to his best friend’s family cabin was supposed to be about being alone. But those plans are foiled by Adele James who brings the mother of all snowstorms with her.

Adele is gorgeous, funny, and fiery, but she’s also his best friend’s sister, aka, completely off limits. But when the cabin loses power in the middle of the storm, Jace forgets the rules and spends the Christmas days and nights with Adele wrapped in his arms. Once the snow thaws, they’ll call things off, no harm, no foul… if they can agree to keep their hearts out of the equation.

Titles in the Take The Shot series include:  An Unexpected Christmas –

An Unexpected Christmas begins the Take The Shot series by Shannon Richard.  If you’ve read the Country Roads series it’s possible that you’ve run into the James family before… if not that’s fine, but it is an excellent series you may want to check out for yourself.  I just happen to enjoy catching little snippets of connections between series or characters, and the fact that Adele has been crushing on her brother’s friend, Jace, for years is a sweet touch to the beginning of this new series.

Adele made the mistake of getting romantically involved with a lying, cheating former co-worker.  It might not have been quite so bad if Troy wasn’t a famous bad boy actor with a reputation of a playboy or that his cheating hadn’t made tabloid headline news.  Now all that Adele wants is to get away from cameras, family and spend her time off before her next project totally alone, except for her dog.  She headed to a remote cabin of a friend’s family and was ready to shut out the world.  But circumstances had different plans as it seems that cabin already had an occupant – her brother’s friend, Jace.  And wasn’t this an unwelcome fine mess to land in.  Alone was one thing, alone with the man she was more than half in love with for years was just another case of fate not liking her too much lately.  But maybe fate had other plans for them both, and being snowed in was just the beginning of a future neither had planned on but was turning out to be perfect for them.

I enjoyed  my time in An Unexpected Christmas.  The chemistry between Adele and Jace sizzled, they are a very believable couple with temptation right in front of them.  You’ll discover some priceless laugh out loud moments, and some tender ones as well.  It’s a quick read but one full of Christmas magic, two people who work well together and a chance at an everlasting love… if they are willing to take that risk.  I’d recommend this one to any Romance reader who enjoys holiday touches, believable characters and the excitement of starting a new series.