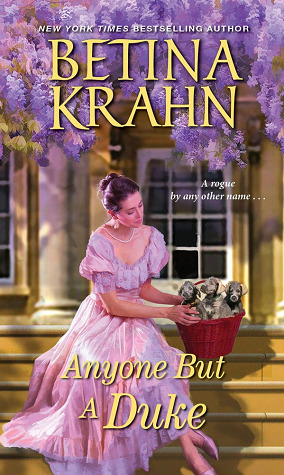 The youngest of four spirited American sisters, Sarah Bumgarten has studiously avoided her mother’s attempts to find her a titled husband among London’s aristocracy. Now, after an earl’s very public rejection, it seems her ideal mate will be anyone but a duke, a marquis, a baron, or a viscount…

Thankfully, there are no noblemen in sight at Betancourt, the country estate where Sarah takes refuge. Its rightful owner, the Duke of Meridian, sibling to Sarah’s brother-in-law, has been absent for years. Accompanied by her bevy of beloved animals, Sarah delights in refurbishing the once-grand property. But even a self-assured frontier heiress needs help when greedy tenants are threatened by her presence…

Out of nowhere, a stranger jumps into the fray when ruffians attack. Nothing about “Art,” the roguish interloper—now recuperating in the ducal bedchamber—smacks of nobility, with his brazen sensuality, worldly knowledge, and deeply seductive voice. Yet could he be the errant duke? If so, Sarah soon realizes this homecoming promises to be filled with unexpected challenges and passionate possibilities.

Although ANYONE BUT A DUKE is the third story in the Sin and Sensibility series I wasn’t in the least bit lost and completely enjoyed my time in this world – enough so that I’ll go back to the beginning to get the stories I originally missed.  (Sometimes stepping into a series out of order works out well in the end)

After her expected romantic entanglement turned embarrassing due to nothing she did, Sarah has left London for the estate of her sister and brother-in-law far from the humiliation and the gossiping tongues of the ton.  Here she’s made a place for herself with purpose as she begins the task of bringing the estate back to its former beauty and usefulness.  Yet not everyone is happy with her presence or her actions and Sarah will soon face danger from several fronts.  An unlikely rescuer arrives just in time – and with far more knowledge than he should have about her and this particular estate.

I liked Sarah and Arthur both together as a couple and individually.  My heart broke for “Art” as we slowly uncover what has happened to this man since he left home years ago.  He is not the same man who left, and the man he is today couldn’t have happened if he hadn’t gone through so much and grew, not letting circumstances defeat him.  Their romance is a slow burn with an underlying sizzle as they work their way toward a happy ending.  Yet there is danger to be faced, a villain to reveal and truths to be told before that can happen for this couple – getting to their future was an enjoyable, emotional adventure.  One that I completely enjoyed and would recommend for any Romance reader who enjoys a strong plot, believable characters, a touch of danger, a bit of mystery, and a love worth fighting for.