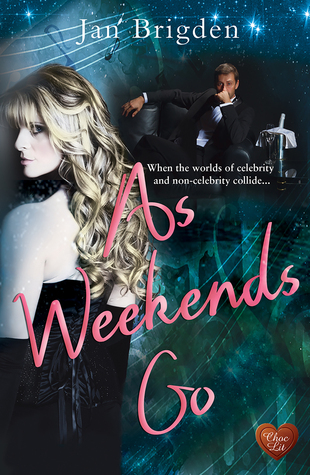 What if your entire life changed in the space of a weekend?

When Rebecca’s friend Abi convinces her to get away from it all at the fabulous Hawksley Manor hotel in York, it seems too good to be true. Pampering and relaxation is just what Rebecca needs to distract herself from the creeping suspicion that her husband, Greg, is hiding something from her.

She never imagined that by the end of the weekend she would have dined with celebrities or danced the night away in exclusive clubs. Nor could she have predicted she would meet famous footballer, Alex Heath, or that he would be the one to show her that she deserved so much more …

But no matter how amazing a weekend is, it’s always back to reality come Monday morning – isn’t it?

Read on for my thoughts on As Weekends Go.  No true spoilers, promise.

As Weekends Go is a slice of life type of story.  We get a peek into the lives of several people and how their lives are connected and how their perceptions of those lives will change over the course of one weekend.

Rebecca’s best friend Abi has been given the gift of a weekend away at a super posh hotel/resort – a gift since her boss and his wife cannot go themselves.  Who better to share such an amazing windfall than with your best friend?  Rebecca’s husband, Greg, will be away for business that weekend and Abi’s boyfriend, Nick, will be at a bachelor’s weekend with the guys.  It’s the perfect time for some girlfriend time with a bit of pampering tossed in – best of all, it’s free.

When Rebecca accidentally stumbles on the grand stairway after realizing that a famous footballer, Alex Heath is staying at the hotel as well the changes in lives begins.  Alex quickly rescues Rebecca from a serious fall and there is an instant awareness between them.  More than simply a fan meeting a sports hero, but something clicks between them.  For the rest of Rebecca and Abi’s stay at the hotel they will meet up with Alex and his friend often and a bit of harmless flirtation on Abi’s part seals the deal for them all to spend more time together.

Rebecca’s marriage is on shaky ground right now.  Her friends and family are aware of what an absolute jerk Greg actually is.  His professional climb up the corporate ladder is all that he can see, and he treats Rebecca very much as a servant, the woman with no life but to serve her husband’s every need.  He has alienated most of her friends and family – pretty much trying to cut her off from her own support system.  Greg has never physically abused her, but he certainly uses her for his own purposes on so many levels.  He is a scumbag of the highest degree.  Rebecca is not a doormat, she is aware of Greg’s actions and is trying to hold her marriage together in spite of what her instincts are attempting to tell her.

So while there is a strong attraction between Alex and Rebecca, she will not act on it and he will respect her wishes.

Upon returning home, Rebecca will be distraught at returning to her normal.  She is honestly very attracted to Alex and knows that she should just walk away from her crumbling marriage but she won’t just yet.  Greg’s actions will increase, especially when his plan to show off to a former flame, the woman who dumped him right before Rebecca brought him back from the edge of despair, is finally giving him the results he wants.  Nina is a woman who has been in his blood for as long as Greg can remember and when they hook up again, beginning an affair that will benefit them both professionally and physically – then Greg’s true, ugly colors are out in the open for everyone to see… finally even Rebecca has to admit that their lives together are finished.

As Weekends Go is an intense look into the lives we have behind the scenes that everyone else is aware of.  In many ways it reads like a night time television drama with scenes changing to the events in other couples/people’s lives happening at about the same time.  While I enjoyed the story I also had some misgivings with it.  But this is the author’s world, not mine so I can only judge the story by what I am presented with.  Personally I felt that Rebecca’s suffering at Greg’s hands was drawn out too long.  I get why it was written this way, but from a personal opinion I wanted Rebecca’s anguish to finally cease and move on to a happier ending for her.  And, truthfully I really wanted Greg to suffer, I mean really suffer for his actions.  Yet, again that reaction is on me and not the author.

If you enjoy a story with relatable characters that is emotionally intense, and draws you into the characters lives deeply then  As Weekends Go is a story that you will want to pick up.

*I received an e-ARC of  As Weekends Go from the publisher and NetGalley in exchange for an honest review. That does not change what I think of this novel.*