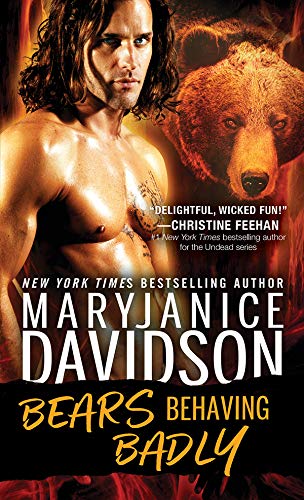 Bears Behaving Badly is the first story in the BeWere My Heart series and delivers an intriguing world full of shifters, bad guys, with an interesting plot.  This is my first story by MaryJanice Davidson, and while I enjoyed the story it took me a little bit to become comfortable with her writing style.  (every author is slightly different so this is not unusual)

Annette and David have been dancing around each other with an attraction that neither one has actually acknowledged or tried to go any further on – there were reasons, but also there was not the ‘shifter insta-mate knowledge’ that I’m more accustomed to.  They definitely have a banter-filled relationship going into this unusual situation but romance isn’t the full focus of their story.  One selectively mute wolf shifter teen is at the center of a lot of this story in many ways, and when the danger truly begins the action is fast-paced and intense.  In a world where humans have no idea that they are living side by side with shifters the threat of ousting the shifters is very real and plays into other aspects of this story as well.

I enjoyed Bears Behaving Badly and will pick up the next story in this series when it’s released.

Available in paperback, audio and e-reader (mine is the Kindle)