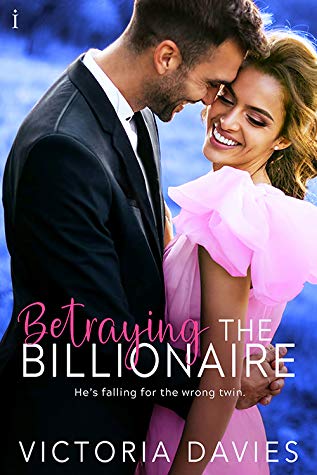 I’ll admit, I’m a sucker for a hidden identity or a switch willingly Romance, and BETRAYING THE BILLIONAIRE has all that and so much more.  Lillian and Holly’s father is about to send Lillian off to a business enhancing marriage of convenience and she wants nothing to do with the man who she is supposed to surrender herself to.  In steps her twin sister, Holly, who is also appalled by their father’s actions by trying to marry her sister off to a man who will never love her and only sees her as a way to grow his business.  Holly will make the temporary sacrifice to stand in Lillian’s place because Julian Worth would accept nothing less than the heir apparent sister.

But what happens when the man Holly meets turns out to be so different from anything she or her twin had ever expected?  And how in the world was she supposed to simply walk away from the man who now owns her heart – even if he had no clue as to who she really is?

I fell in love with Julian.  He’s not a typical wealthy CEO, he’s a man who has worked his way up to capture his dream.  He still has close ties, even a deep love for his foster parents and while he may have spent his life building his company, he also sees the value of one sweet Holly in his life – although he doesn’t yet know he’s falling in love with the “wrong” twin.

BETRAYING THE BILLIONAIRE is full of banter, steamy encounters, falling in love and holding on to a secret that will or could destroy everything that truly matters.  There are chuckle out loud moments, and a few moments when tears will threaten to fall.  In all, I had a wonderful time with Holly and Julian — and now I need to know what Lillian’s future holds.  Hopefully, I’ll find out in the next story.

Looking for a Romance that will capture your heart and your imagination?  Then you’ll want to check out BETRAYED BY THE BILLIONAIRE.  I had such fun and I believe you would as well.