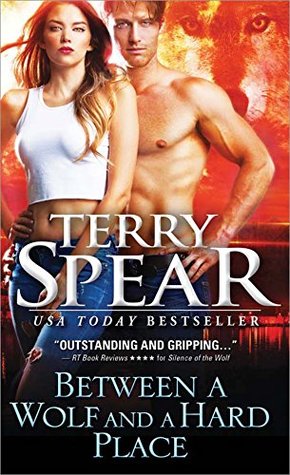 Alpha werewolf Brett Silver has an ulterior motive when he donates a prized family heirloom to the Silver Town hotel. Ellie MacTire owns the place with her sisters, and he’s out to get her attention.

Ellie is even more special than Brett knows. She’s a wolf-shifter with a unique ability to commune with the dead. Ellie has been ostracized, so she protects herself and those she loves by revealing nothing-not even when strange and dangerous things begin to happen in Silver Town. And especially not to the devastatingly handsome and generous wolf who’s determined to win her over..

It’s always a fun adventure when I can return to Silver Town, and this time around is no exception.  Brett and Ellie’s story is definitely fun, with a slightly unusual touch.  As one of the MacTire sisters who’ve bought, renovated and now runs the hotel in Silver Town, Ellie has her hands full.  Not to mention her one additional unique ability.  Let’s call Ellie a ghost whisperer since she not only sees them, talks to them but she can direct them in the process of crossing over beyond this life… usually, unless she’s encountering a stubborn ghost.  And she may just have met her match in Brett’s great aunt – one stubborn ghost with a mission, and a lot to be said about mysteries and danger heading for the town.

Brett is clueless to Ellie’s special talents.  All he knows is that this she-wolf is the one for him, and the sooner he can get her on the same page as he is on mating – well the happier he and his wolf are going to be.  He’s pretty sure that Ellie feels the same way about him, but for some reason she’s holding back.  Well, he’ll just shower her with the gift of his great aunt’s piano for the hotel and see what passing that heirloom along to his intended mate does to speed thing up.  Only, Brett just handed an up to now silent ghost the voice she needed, and man can she talk.  Ellie holds her secret ghost whisperer abilities close and rarely tells anyone.  The few men she thought might be serious soon hit the road upon learning that she talks to ghosts.  While Brett is the one for her, she’s hesitant about telling him her entire truth – but one opinionated ghost is going to make that happen sooner than she was ready for.

Between A Wolf and A Hard Place is simply pure fun for those of us who love not only Terry Spear’s works but shifter romance in general.  A mystery, a bit of a haunting, learning to accept the person you love exactly as they are, and trusting in the love that could last a lifetime.  You’ll find all that and then some in this entertaining visit back to Silver Town.  I laughed, I smiled, I definitely got misty eyed – and I had a blast, and isn’t that why we’re addicted to reading?  Loved this one and I’m already looking forward to what comes next, yes I’m addicted.

Available in paperback and for the kindle