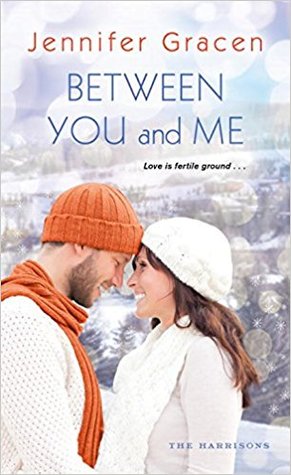 As the only daughter of the wealthy Harrison clan, Tess Harrison has everything—except the baby she longs for. With no husband in sight, she escapes to her family’s retreat in Aspen, Colorado, visions of sperm donors dancing in her head. Instead, she finds Logan Carter. When the ruggedly handsome manager of the Harrison ski house offers to be her baby daddy in exchange for her playing his girlfriend, Tess is breathless to begin the charade. After all, the brokenhearted heiress knows better than to fall in love . . .

She would be Logan’s dream girl, if his dark past had left him with any dreams. Now the brooding bachelor’s only hope is to satisfy his mother’s dying wish to see him happily paired off—and give lovely Tess the baby she longs for. But when he and Tess opt to make a baby the old-fashioned way, he’s fighting hard against the longing to hold on to the elusive Harrison beauty forever . .

Titles in The Harrisons series include:  More Than You Know – Someone Like You – ‘Tis The Season – Between You and Me – It Might Be You –

It’s very easy to slip into a mindset of believing that the wealthy have an easy life.  Certainly financial security can ease a lot of worries and burdens, but money isn’t everything.  Tess may belong to a very wealthy family, who are, for the most part, happy and secure within themselves.  She’s watched her brothers find love and welcomed their loves into her own heart as part of her family.  But Tess hasn’t found her happy every after man and the time to fulfill her greatest, most important wish for herself is quickly fading away… at least in her mind.  Tess wants a child, even children if life was very good to her.  She’s well aware that the traditional way of love, relationship, family doesn’t happen for everyone, and she’s no longer willing to wait for that elusive happy ending to happen for her.  She’s made her decision, her plan is well in place… now comes the complication in the form of one handsome man who sets off alarms and wishes for something different.  The forever kind of different.

Between You and Me was a story that captured my emotions pretty  much from the opening onward.  Tess is a strong, kind woman who has always had her family’s back and now she’s looking for something for herself, something that she has the means to accomplish in a non-traditional manner.  It’s her dream and she should be the driver of that dream.  I appreciated that the misconceptions that Logan had about Tess didn’t last long.  When two people can honestly talk about issues and resolve them they have a much better chance of engaging my empathy instead of dragging out something that could easily be resolved.  That doesn’t mean that this couple didn’t give me some frustrating moments, but I “got” their reasons, even if I didn’t agree with them.

For me, Logan and Tess simply worked as a couple.  I could believe in their situation, their reasons to stay apart and especially the moments when they allowed their hearts to rule their minds.  If you’re looking for a friends to lovers romance then Between You and Me has you covered on that.  Heartwarming and romantic, and at times a bit formal because of their initial decisions… no matter the emotions they were giving to me I understood them and waited impatiently for them to discover the truth behind the actions they did for each other.  If you’ve followed The Harrisons series then you’ll be glad to see Tess finally join her brothers in that elusive happy ever after ending — and if this is your first glimpse into the world of the Harrison clan then you’ll be looking for the earlier books to get caught up for we aren’t quite finished with this series yet.  I’d recommend this story or series to any Romance reader who believes that love matters most no matter the circumstances.  It’s just that simple.  I enjoyed this one, and I believe you will, too.

Tags: Between You and Me, Christmas Romance, Contemporary Romance, Jennifer Gracen, The Harrisons #4