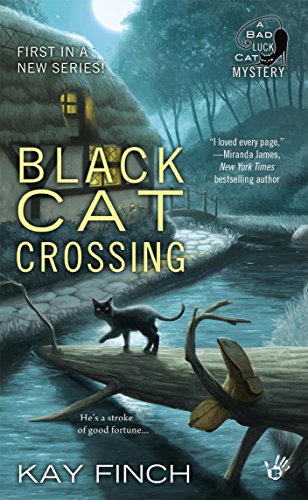 I don’t usually buy a complete series by a new-to-me author.  To be frank, the book budget only stretches so far each month so I’m usually careful about book purchases.  Yet there was something about one of the books that drew me in, made me want to know more – and being the “read from the beginning” series junkie that I am I looked at this title for a long time… and then simply one-clicked on the rest of the series.  By my enjoyment and reaction to BLACK CAT CROSSING, I believe I made an excellent choice and will remember to follow that instinct toward new-to-me authors and series in the future.

Sabrina, a yet to be published author, has left her job in the big city and returned to the small town she spent so much time in during her younger years with her Aunt Rowe.  Her aunt has broken her leg and Sabrina is here to help her run the cottages for vacationers business – and get that book written and published.  The last thing she expected was to discover such a strong superstitious reaction by some residents of the town to a stray black cat – or have that same adorable black cat lead her straight to a dead body in the small river that runs alongside the property.  Now it’s going to take all of her imagination and plotting skills to ferret out the real killer before someone else gets dead or her beloved aunt is arrested for murder.

I was fully engaged in BLACK CAT CROSSING from the opening page right through to the ending.  I never try to figure out “whodunit”, my enjoyment in Cozy Mysteries is the getting to that discovery point – but even if I were purposefully looking for the killer, I would have been blindsided for that resolution never crossed into my radar range, at all.  There are a lot of true suspects in this small town, even if one particular police officer already believes she has the killer in her sights.  Sabrina has her own circle of friends to help. and perhaps one of those suspects may turn into more of a romantic connection later in the series (I’m speculating here).

The bottom line?  I had a blast with this story, completely kept my attention riveted on the page with interesting characters, a plot that made sense, and one stray black cat now named Hitchcock who stole my heart.  If you love a good Cozy Mystery then you’ll want to check out BLACK CAT CROSSING.  Yes, the beginning story has been out for several years – but fortunately, books never really expire, so you can dive in from the beginning and completely enjoy yourself trying to solve Bobby Joe’s murder.

I own a Kindle edition of Black Cat Crossing

« A Gingerbread Romance by Lacey Baker
The Risk by Caitlin Crews »