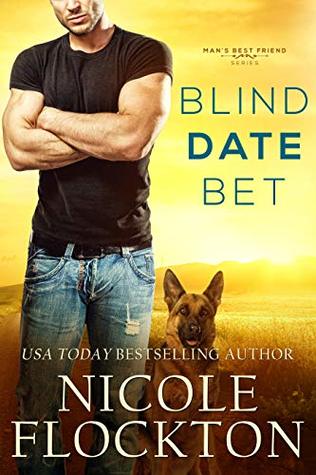 After loving and losing a soldier once, Isabella Knowles made a vow: No more military men. She’s rebuilt her life and has a classroom full of fifth-graders to love, which is more than enough even though her father doesn’t agree. When he sets her up on a blind date, she only goes to humor him — never dreaming that the man she meets will tempt her to break her one rule.

In theory, Ethan Masters is not opposed to the wife, kids, and house with a white picket fence. But he loves his career as a K-9 handler in the air force, and a dream promotion dangles before him like dog tags. While contemplating his future, he accepts a drunken bet for a blind date, never dreaming that the captivating woman fits perfectly into his ideal, all-American dream. Only one problem. She’s gun-shy about all things military.

Can Ethan prove to Isabella love is worth the risk?

“Blind Date Bet” begins the Man’s Best Friend series with a story of two people with very strong personalities, set in stone issues, and while perhaps not totally opposites they have enough differences to get them bickering over unusual things.

I liked Ethan and Izzy, yet they each had me frustrated with their actions on more than one occasion.  I “got” why Izzy would hesitate to allow a military man in her life once again.  She’s been through some major heartbreak over the death of her husband, and to be cautious is understandable.  Yet… I found very little sympathy for Izzy as she is today.  She’s holding on to the past with a vice grip and blaming everyone with any connection to an entity that, in her mind, caused her husband’s accident.  At first, I understood her reluctance to date a military man… but as she kept digging in her heels and ignored the man on a personal level, seeing only the military connection, my frustration with this character reached an ending point.  The connection, the chemistry between Ethan and Issy is obvious to strangers… yet, Izzy’s ability to run hot then cold then indifferent then annoyed then hot again became so frustrating.

Frankly, I wanted more of Sam.  I wanted to experience that unique connection between a K-9 handler and his animal and was surprised that Sam wasn’t with him far more often.  Or played a larger part in the romance.  I also freely admit to being hooked on any K-9 involvement in a story, and I simply wanted more.

In all, I enjoyed “Blind Date Bet” even when I didn’t like how the characters were acting.  It’s an intriguing beginning to a series that I will continue for I now want to know what happens to some secondary characters.

« January 2019 “24 in 48” Readathon is this Coming Weekend!
The Rancher’s Unexpected Baby by Leslie North »