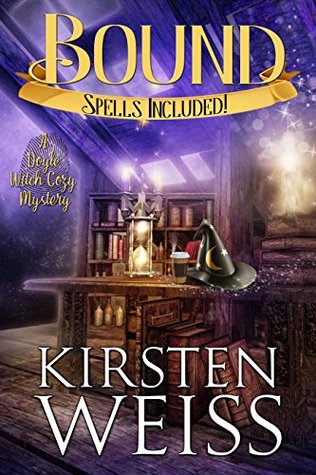 The Bonheim triplets live seemingly ordinary lives, hiding their magic from their neighbors in the small, mountain town of Doyle, California. But then a body is found in flighty, big sister Jayce’s coffee shop. Confronted by a sheriff with a grudge, a sister in denial, and a sexy lawyer with an agenda of his own, no-nonsense Karin must prove her sister innocent.

But as Karin works to unravel the murder, the knottier the mystery of her small mountain town becomes. Why are hikers vanishing in the nearby woods? Why are some people cursed with bad luck and others with good? And what is Jayce’s lawyer hiding?

With her sister’s fate hanging by a thread, Karin struggles to untangle the truth, and death stalks ever closer.

BOUND is the first story in Kirsten Weiss’ Paranormal Cozy Mystery The Witches of Doyle.  It’s been available for a few years now, but I’m not a reader who must have only the “hottest off the presses” releases to make me a happy reader.  A good story is, well, a good story no matter its release date.

Most of what you’d need to know to pick up BOUND is in the Cover Description.  I enjoyed this introduction to the Bonheim triplets and their strange small town of Doyle, California very much.  We’re aware that they are hereditary witches from the very start, yet it’s not an overkill simply a fact of life for these three sisters and their aunt who has raised them from infancy.  Their mother died in childbirth, and their father in an accident shortly after which brought their Aunt Ellen to them to raise Karin, Jayce, and Lenore.  She has loved and protected them with not only an aunt’s love but with a mother’s fierceness as well.  Perhaps she’s protected them too much by not telling them everything they would eventually need to know.

For their entire lives, Ellen has tried to protect them from a family curse.  Now as Ellen is rapidly losing her battle with cancer it’s time to tell her girls absolutely everything – especially since Jayce is the main suspect in the murder of a woman found in Jayce’s coffee shop.

Each story in The Witches of Doyle series features one of the sisters as the main focus, although everyone plays a large part in each mystery.  Karin is the featured sister in BOUND as we learn of the triplet’s past, the current danger and mysteries, and perhaps an interesting man who will become so much more than her sister’s lawyer.

Since I try not to accidentally do spoilers, there isn’t a lot more I can say about BOUND aside from the simple fact that this story, this town grows on you.  That might sound odd but there isn’t an information dump of paranormal activity, it’s felt but that feeling grows slowly.  Little tidbits of information slowly build a broader picture — and I liked that approach very much.  If I’m frank then I’d say (for me) the ending put a whole lot into the final two chapters.  And, yes, I know, that’s when the climax comes yet I found there was a lot to take in at once because the rest of the story had that slowly growing, drip, drip of information and impressions.  Still, that’s my opinion and you may feel differently.

The actual villain was on my short-list but that was a surprise in many ways.  I am intrigued by the threads woven through this first story that will lead to the ones to come.  This series definitely has my curiosity at a high point so I will be picking up the rest of the books over the next few weeks.  If you love a good, intriguing Paranormal Cozy Mystery then BOUND would be right up your alley.

I own a Kindle edition of BOUND.