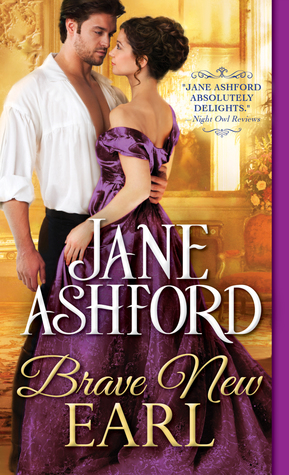 I have followed Jane Ashford’s works for years, and it’s always a pleasure to begin a new series with new adventures and characters to fall in love with.  Brave New Earl starts of on a rather somber note as Benjamin is introduced as a grieving widower who cannot get past his late wife’s death.  Their young son reminds him of his loss, so most of the time he cannot even be in the same room.  Ben has cut himself off from most of the world, deep in his own personal grief and cannot seem to realize that while he does love his son, he is also leaving him to run wild without his father’s presence in his young life.

When Jean, a cousin of Ben’s late wife, learns of his son’s supposed neglect she immediately sets out to remove the young boy from Ben’s household.  Jean knows first hand how a neglectful parent can affect a life, and she is determined that Geoffrey does not face the fate that she once did.  She didn’t expect the attraction she had toward Ben, falling in love was not in her plan.  Now comes the challenge to bring one Earl out of his grief and into the world of the living and the loving once again.

There is some world building, and I’m guessing some setting up of the rest of the series as well.  Time will tell on that.  I’m sensing a theme to this series, but again I’ll wait to see if my thoughts pan out.  I enjoyed Brave New Earl and will definitely be following this new series.  Jean and Ben work well as a couple, eventually.  The scene robber here is one little 5 year old boy.  Jean’s life as a child is heartbreaking, and it’s easy to understand why she is so determined to rescue Ben’s son from such a fate.  While I liked Ben, it was Jean who captured most of my attention in their romance.  There is a definite spark between them, and while the passion is present it is mostly a fade to black description.  I had fun with this one and wouldn’t hesitate to recommend Brave New Earl to any Regency Romance or Historical Romance reader.  I’ll be watching for the next story in this series.