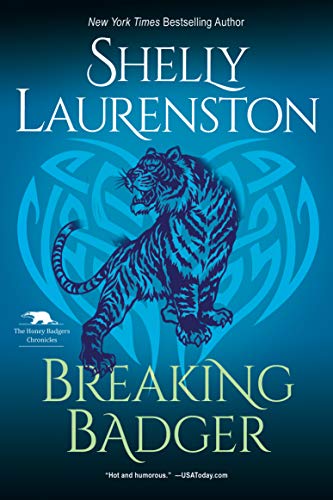 Breaking Badger is the fourth title in The Honey Badger Chronicles series – and it is an amazing mishmash of comedy, romance, revenge, vengeance, family issues, deep friendships, and finding that perfect person for you… even if they are a bit, well, unique in their own right.

I don’t even know how to explain Mads and Finn to you, especially if this is your first experience with this series.  I adored them, I loved the fast-paced feel of their story with so many other characters showing up and putting in their two cents worth (wanted or not).  If you love a good Shifter Romance, if chaos reigns freely in your own life, or if you simply like the unique and unusual… then Breaking Badger is perfect for you.

Finn and his brothers are looking for their father’s murderer.  Unfortunately for them, their best bet for gaining information has just been kicked out of their house after Finn helped Mads.  You do not just brush off a honey badger and get away with it… have you met honey badgers?  Honey badgers know how to hold a grudge better than any other creature on earth, humans included!  So now Finn and Mads are working together with a lot of help (?) from just about everyone else… and sometimes that so-called help leads right into a dangerous situation.

I know not everyone is going to love this kind of chaos, multi-character, not too much romance style of Paranormal Romance.  Yet, if you haven’t discovered the madness of this series, the quirkiness of this author’s characters (always), or the pure fun of this world of black ops/basketball, murder, mates being found, revenge handed out, or holding that grudge for years then I hope you’ll give Breaking Badger a try.  I’d suggest starting at the beginning of the series for all the backstory and such, but that’s not always possible.  I had fun here, and if you give it a try you just might discover that you, too, belong in this madcap world of angry honey badgers, revenge-seeking tigers, and the adventures they’ll get into before that happy ending happens.

« A Silent Child by Claire Sheldon
Forgotten in Death by J. D. Robb »