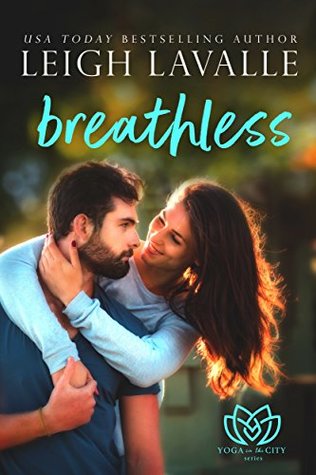 After moving cross-country yet again, Hannah Roberts wants to put down roots in Colorado. She’s sunk her life savings into a share of Bloom Yoga Studio, but the studio is losing money, and fast. The building is undergoing a messy, noisy renovation–and the hot carpenter in charge is distracting her yoga students in more ways than one. If Hannah can’t talk the hard-bodied builder out of his power tools, she might as well kiss her dreams goodbye.

When Jake Marshall returned from Afghanistan, he brought back an injured knee and a lot of bad memories. He just wants to finish this renovation, rehab his knee, and head for Alaska to leave it all behind. A sexy yoga teacher doesn’t fit into his plans. But when Hannah offers him private sessions in exchange for quiet hours—he’s all in.  He doesn’t expect that while she’s healing his knee, Hannah will poke at all his hidden wounds…and come dangerously close to breaking open his heart.

Titles in the Yoga In The City series include:  Breathless –

Sometimes I run into stories that really do reflect their title, Breathless is one of those.  Hannah captured my imagination, she’s so like a friend of mine that it’s rather scary.  I understood her reasons, even if they were totally not the best thing for her.  At times, the hardest thing to let go of is your past – those pesky memories make that an often difficult task.

Jake and Hannah have a slow burn romance that will melt the pages of your e-reader.  Really.  But it’s not exactly an easy journey to get to that point.  Two different minded people fighting a strong attraction is one of my favorite story lines.  Which will win?  Logic or emotions?  Truthfully, I enjoy it most when it’s a combination of the two, and that is how I saw this couple.  They had plenty of reasons why they couldn’t work, and a lot of emotions that said something far different.

I had fun with Breathless, and I believe any reader who loves Romance will enjoy this one as well.  Letting someone into your heart, trusting them with all that you are… that’s scary, not always easy and that’s what love is.  If you enjoy a romance that is hard fought for, that changes lives and gives you an emotional kick, then this story is one you’ll want to read.  The first in the series, so get caught up in Yoga In The City from the very beginning.