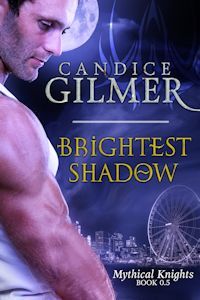 I’m always aware when I read a new to me author’s works to ease myself into the story, don’t have preconceived ideas about what I’m about to read.. and always know that not every story is going to be for every reader.  So when I picked up Candice Gilmer’s Dark Within from NetGalley (review will follow shortly) I went back to Amazon to look for the prequel to this series.  I don’t like to fall into the judging a book by its cover thing, but I can tell quite a bit about whether a series is going to be one I’ll want to follow by how the prequel sets everything up.

Brightest Shadow absolutely blew me outta the water.  Every author who writes shifter stories puts their own unique and subtle twist on the lore of the werewolf.  What Ms Gilmer is creating with the Mythical Knights series is slightly different, interesting and completely unique.  And I was hooked for the entire series by the time I’d finished up the first couple chapters.

David’s father has recently died from natural causes.  As the eldest son, David will become the Alpha of his pack.  However, the Alpha title and mantle doesn’t immediately fall upon the leader in Ms Gilmer’s universe, the alpha is something that comes over the leader and the physical act of taking on the alpha is painful and at times, complicated.  David has not yet taken on his alpha, and his family is obviously worried as they keep watching him almost constantly for signs of his coming into his power.

Kelsey has dreams, she’s not a shifter or any other mystical creature, that she knows about anyway, but she does have precognitive dreams.  Her dreams usually only involve herself, but recently she’s been having a dream of being chased, in danger of losing her life, and someone is running with her but she cannot see them only feel their presence.  The dream is vivid enough to have her awakening screaming in terror.  Unfortunately she knows it is something that is to come and it scares the crap out of her.

David and Kelsey will meet at a fancy presentation to give a scholarship in his father’s name.  Each wander off from the event for their own reasons yet when they meet there is an immediate spark of interest.  Kelsey is plagued with the boss from hell who spends most of his time taking credit for what work Kelsey has done or reaming her out over imagined faults.

Eventually the physical attraction between David and Kelsey erupts, which will only drive Kelsey away instead of toward David.  Slowly David will charm her into spending time with him again.  Until the night when Kelsey’s dream comes true… and she comes to realize that there are creatures of the night that she never knew existed outside of the pages of her favorite books.  And both she and David are in such danger…

A vivid, intriguing and addicting story that I can only believe will get better as story after story is added to this series.  I am hooked and I’m betting that if you love Paranormal Romance then you will be too.  Check out Brightest Shadow and get ready for an enjoyable adventure.

« All Is Calm, All Is Bright by Colleen Coble
Dark Within by Candice Gilmer »