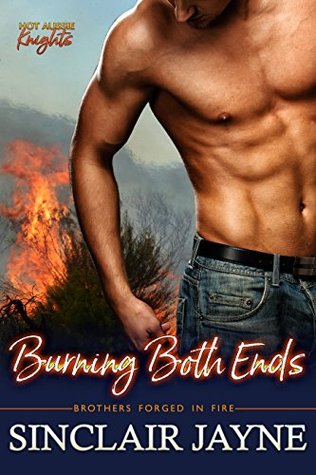 Burning Both Ends is a sizzling romance where both the heroine and the hero bring in much of their conflict from their pasts.  Going to Australia as part of an exchange program with the firefighters wasn’t exactly Dare’s choice in the matter.  She’d been pretty much told she was going and that was it.  Add into that situation the stress of her grandfather’s recent death – and there is a lot of emotional turmoil facing Dare as she arrives for her firefighter grandfather’s funeral and wake at the local bar.  Lock had also lost his friend and mentor at the senior Knight’s death, and nothing about being at this reunion of friends, family and firefighters was comfortable for him right up until she walked in the bar.  It was her eyes that got to him first, vulnerable sadness that was quickly covered with determination, that super body, maybe – but in truth it was the attitude, the total sass that was hot, sensuous and beguiling all at once that had him doing what he knew he shouldn’t.  Both had issues in their past, their present could easily be a hot, sexy, momentary fling until their future became more important – the stay with me forever kind of important.

I enjoyed my time with Dare and Lock in Burning Both Ends which is the second story in two series, Hot Aussie Knights and Smoky Mountain Knights.  There is a lot of emotion going on in this story.  Some of it I completely understood, yet there were times when I really wanted them each to move beyond what was and reach out for what could be.  There are aspects of this story that I cannot talk about for they fall under major spoilers.  So, I’ll say I wish there had been another type of resolution, bringing them together.  I think they deserved better than what they were served.  But.  It’s not my story to tell, only a story to read and react to.  In the end, all of their issues were dealt with, and I guess that’s what really matters.

If you’re in the mood for an emotional, sizzling story with hearts fully engaged, then Burning Both Ends is one you’ll want to pick up.  It’s a solid story, engaging main characters and a story that will touch your heart.  I’d recommend this one for any Romance reader.