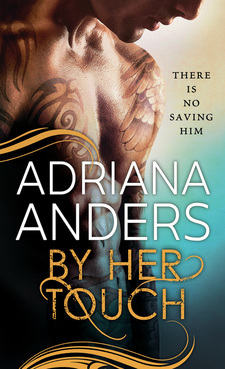 Undercover cop Clay Navarro left the Sultans biker gang a changed man. Its ringleaders may be awaiting trial, but he wears the memory of every brutal act he was forced to commit tattooed across his skin. He doesn’t have space in his messed-up life for anything gentle–not now, maybe not ever.
Dr. Georgette Hadley is drawn to the damaged stranger’s pain, intimidated but intrigued by the warmth that lies beneath Clay’s frightening exterior. But when the Sultans return looking for revenge, she finds herself drawn into the dirty underbelly of a life forged in violence… that not even her touch may be able to heal.

Titles in the Blank Canvas series include: Under Her Skin – By Her Touch – In His Hands

There are stories where the pain in the lives of the characters affect me so much that I struggle with the words to convey to you why I feel as I do about By Her Touch.  In the end I simply have to accept that every reader reacts in their own fashion to an intense story, and encourage you to take the journey that the Blank Canvas series presents.

Clay has been undercover for…. too long, deep within the MC who murdered a loved one.  He’s been outed and bears the scars and markings branding him a traitor to the MC.  Now he’s in hiding, awaiting the trial to put the scum behind bars where they belong.  In the meantime, he’s looking to remove some of the tattoos that mark him.  He turns to one doctor, never realizing the role she would play in his life and the danger just knowing about him will place her in.

Georgette has pain of her own, and she recognizes the pain her newest client is holding beneath the ink on his body.  The cruelty of the forced tattoos as well as the intent behind them is soon obvious as George and Clay become so much more than client and patient.  While the attraction between them is slowly burning, the MC makes a move that will place them both in extreme danger.  Now Clay not only has to protect this amazing woman, but come to terms with just how important she’s become to him.

By Her Touch is intense.  It’s also a beautiful journey for two broken people to heal, to love, to finally live free once again.  There are situations in this story that could be triggers – abuse, violence are part of this couple’s journey.  While I’d love for you to enjoy this story, protect yourself first of all.

This story is one that I can only strongly encourage you to experience for yourself.  There is beauty to be found within the pain and chaos involved, the characters both main and secondary are believable and the emotions strong.