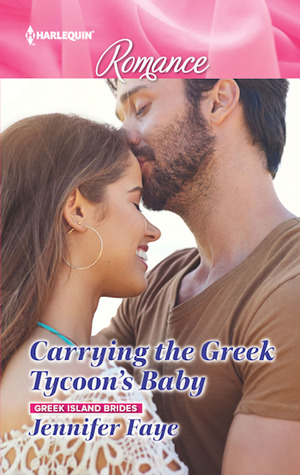 When their one night together has unexpected consequences, Xander must negotiate the deal of a lifetime, and put his guarded heart on the table to convince independent Lea they can be a family…for infinity!

Sometimes coming late to the party can be a good thing since the final story in the Greek Island Brides trilogy will be out in a few weeks I can basically binge-read this without having to wait for the next book.  Timing is such a tricky thing, isn’t it?

CARRYING THE GREEK TYCOON’S BABY brings us to a beautiful Greek island paradise that Lea has inherited from an aunt she knew nothing about before the lawyer contacted her.  Which, of course, resulted in questions her parents didn’t want to answer.  Lea has since fallen out with her parents over her decision to accept the inheritance and move to the island.  Infinity Island is a lovely wedding destination especially with the little bit of magic that surrounds all the couples married here.  There has never been divorce for any couple that said their vows on the island.  The trouble is that the island is now older, buildings need repair and all of this wasn’t as easy as Lea thought it would be.  Now she’s looking for investors… not buyers for the island.  What she gets is one sexy tycoon with a plan of his own — and so much more.

Xander doesn’t believe in love or marriage, he believes in business, profit, and short-term relationships.  He wants Lea’s island and he’s not accustomed to anyone saying no to him.  When it’s obvious that she will not sell, well, then the sizzle between them bursts into a one night flame.  Or it would have been if there weren’t a baby to consider now.

I had such an enjoyable time with two stubborn people, Xander and Lea, in CARRYING THE GREEK TYCOON’S BABY.  I understood why they each acted as they did, but it didn’t stop me from wanting to sit them down for a stern talking to.  We’ll also meet the other two ladies who will have their own stories told in this trilogy.  The story flowed naturally, the world-building was light but necessary, I was emotionally engaged with this couple and needed them to wake up to their love for each other.  If you love a good romance then you’ll love this one.  Now I’m off to pick up CLAIMING THE DRAKOS HEIR, and if my timing is right I should be ready for the final story, WEARING THE GREEK MILLIONAIRE’S RING just as release day arrives.  Gotta love when the timing works out just right.  *grin*

I own a Kindle edition of Carrying the Greek Tycoon’s Baby.