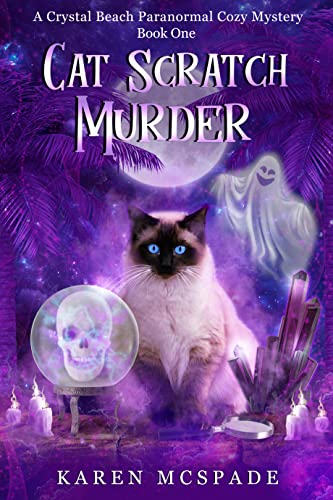 Magic in this witch’s family has a name: Trouble

Her grandmother believes Sidney’s talent for communicating with the dead makes her the most powerful witch in the family, but Sidney just wants to make it through the day without getting fired.

A young writer living in Boston, Sidney is far from the small wacky town of Crystal Beach, Florida, where her spell-happy grandmother retired. She is perfectly happy with her career, her four cats, and the fact that she hasn’t been on a date in… well, years. All is well until her estranged mother informs Sidney that her grandmother has been arrested for murdering a resident at her retirement community.

Sidney road-trips to Florida to discover that her grandmother has no alibi, her grandfather isn’t as dead as she thought he was, and one of her cats can speak. To make matters worse, the handsome Officer Reece is tough on criminals and even tougher on witches. Who cooked up the deadly scone? And why are residents at Shifting Sands suddenly disappearing?

Now, Sidney must embrace her own magical talents to prove her grandmother’s innocence and stop the killer bent on destroying anyone who gets in the way.

Cat Scratcher Murder begins the Crystal Beach Magic Mystery series with a fun and charming look into the world of Sidney our resident not wanting to use her talents witch… and a mystery that she cannot turn her back or her talents on, one involving her beloved but flaky grandmother.

Everything you need to know before picking up this Paranormal Cozy Mystery is in the Cover Description.  I don’t intend to give plot details in this spoiler-free review, that’s not fair to future readers.  What I can safely say is that this story was fun to read, although it’s not very long.  Cat Scratcher Murder is very much an introduction to this world, a peek into the life of Sidney, her mother, her grandmother, her four unique cats, and the mystery her grandmother has found herself in… being accused of murder.  We meet the main characters that we’ll be following in this series and just enough information on the murder to pique interest in continuing with the next book(s)… for this one ends on a cliffhanger.

I enjoyed myself here and although I’m not a huge fan of cliffhanger endings I will pick up the next title Claw of Attraction when it releases because now I’m just as curious to find out what happens next as one of Sidney’s cats would be.

*I received an e-ARC of this novel from the author or author’s team via Booksprout. The opinions expressed in this review are my own – good, bad, or indifferent.*