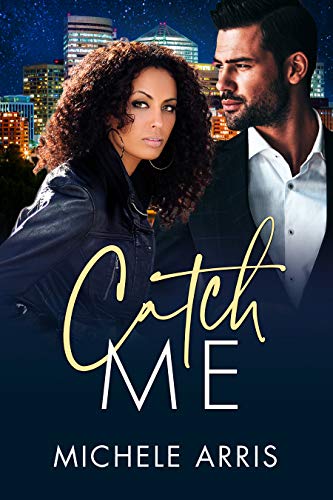 It was supposed to be a straightforward business agreement…

Businessman and COO Dominic Balaska almost has it all, except $20 million to get in on a lucrative real estate deal. His trust fund document requires him to be married by his 31st birthday. In six months. With no romantic prospects in sight, he looks toward Tabitha Seils. She’s made it clear she doesn’t like him, which is exactly the no-strings deal he’s looking for.

Custom pastry chef Tabitha Seils wants nothing more in life than a baby. So when a new mother considers Tabitha to adopt her infant, Tabitha nearly bursts with happiness. She makes the first of three payments but needs to find a way to pay the rest. Marrying Dominic is a win-win: they can access his trust, divvy up the money, and get an annulment.

Neither expected their marriage of convenience would bring about real feelings. Nor the twist in store for their arrangement that could cost them everything.

‘Catch Me‘ is the second title in the ‘Tycoon’s Temptation‘ series, and just like the first (‘See Me’), you could be tempted to see this as enemies to lovers romance.  And perhaps it is in some ways but it is so much more in reality.  I quickly fell into Tabitha and Dominic’s story and completely enjoyed myself immersed in this world once again.

We met Tabitha and Dom in Kennedi and Trent’s story.  Tabitha is Kennedi’s friend and business partner.  Dom is Trent’s step-brother, even though the parents have split the men still, and always will consider each other brothers.  So there is a bit of history between these four people – and Tabitha and Dom have been like oil and water from the beginning.  That only intensifies as their strong opinions on a project they are both involved with hits some, let’s say disagreements on how things should be in the final design.

Right now Dom needs access to his trust fund.  And if he doesn’t marry within six months he’ll never see a penny of it.  Tabitha hasn’t been lucky in love or in her desire to be a mother.  She’s finally made the decision to adopt but that is so very expensive she’s not sure how she’s going to manage that life-changing decision – but she’s determined to find a way somehow.  Neither ever expected that they could be the answer to each other’s dilemma.

I was easily captured by ‘Catch Me‘ by not only the situation for Dom and Tabitha but with the chance to, once again, run into old book friends.  These two people spark off a fire between them in so many ways far beyond their verbal arguments.  Their chemistry is off the charts, and that made them believable to me.  My heart broke for Tabitha’s situation, for her history.  Yet I was also so proud of the determined way she set out to reach her goals no matter what stood in her way.  There were moments that I really wanted to tell Dom to just chill out for a bit, for he is a force to be reckoned with (and not only in his own mind).  Watching them fall, to begin to really see the other without the anger, the arguments in the way was an exciting, emotional, satisfying journey.  And I loved every moment of being back in this world.

If you love a really good, believable romance then I’d recommend this series.  Do you have to read both?  Of course not.  But I would suggest it for doing so creates this world, and both couples are in each other’s lives and stories so it just makes sense to know the whole situation (to me at least).  I had a blast with ‘Catch Me‘, and I suspect you would, too.

If Tomorrow Ever Comes by Magda Alexander

If Tomorrow Ever Comes by Magda Alexander