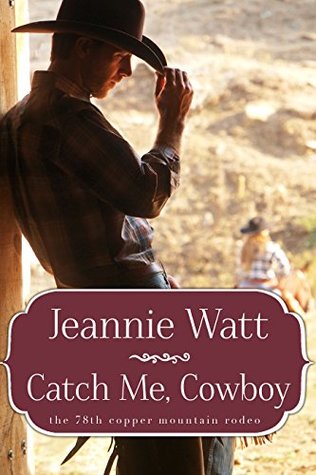 She will not be his second choice…

When champion bronc rider Ty Harding returns home after four long years on the road, the first thing he does is look up Shelby O’Connor—the woman who begged him to stay. The woman he still loves.

Horse trainer Shelby O’Connor truly believes she’s over Ty—until he shows up on her family ranch and turns her world upside down. Shelby isn’t a big one for second chances, but she’s all about proving that she and Ty are done. But when she discovers that Ty plans to head back out on the rodeo circuit, despite his injuries, she has to come to terms with the fact that maybe she isn’t as over him as she thought she was. And now she has to decide what to do about that.

Will history repeat itself, or will Ty and Shelby get another chance at love?

Welcome back to Marietta Montana for the running of The 78th Copper Mountain Rodeo – hold onto your hats and hearts, it’s gonna be an interesting ride.

Catch Me, Cowboy is an emotional ride where one moment you’ll be on Shelby’s side, then you’ll “get” why Ty made the decision he did – but most of all you’ll ache for two people who obviously love each other still.  It’s been four years since that final phone call, four long years without the other person who made them each stronger.  Four long years since an ultimatum tore them apart.  Now, less than a year since Ty was involved in a career ending ride, he’s back and planning on stepping into the arena again… and on winning back the woman he’s always loved.  He’d worked hard at his recovery, even his doctors were amazed at how quickly he’d healed up.  Yet, he needed one last ride, one last chance to sit on the back of an animal who was just as determined to toss him off.  Right now, he didn’t know if the circuit was for him again, but he needed to know that if it was available that he could ride again.  Maybe he was crazy, driven… and maybe he simply had to make the choice to walk away from it on his terms.

Shelby knew Ty was back before he’d driven up the long gravel driveway.  Marietta’s main gossip had done her job well.  Didn’t mean she’d looked forward to this, didn’t mean that the hurt at his decision had healed.  No, it was just one more day to get through.  One more time to face the man she’d loved and try to figure out how to live in the same small town with him.

Circumstances, or fate had conspired to toss them together far more often than Shelby was comfortable with.  But Gramps needed help, and Ty was well versed in handling the older gentleman.

In the coming days Shelby would have to face some harsh realities, deal with her fears and make a choice of loving Ty or watching him walk away again.  Ty had something to prove to himself, but he also needed Shelby to face the part that she had in his decision back then.  He knew they would have torn each other apart… but that happened anyway.  There were reasons that he was just now coming to see, and if he couldn’t help her face them and get past them – then they had no chance at all.

It’s always a joy for me to return to Marietta, Montana.  And the kickoff story to The 78th Copper Mountain Rodeo series was an amazing start.  Ultimatums rarely lead to happy endings.  This was a lesson that Shelby learned the hard way.  I truly did ache for this young woman, especially as the story continues and a better idea of why she made that ultimatum in the first place emerges.  Ty had been caught between a rock and a very hard place, he was mature enough back then to realize that if he stayed it would tear them apart – and knew that when he did leave it would also end what they had.  So, even though it’s easy to put the blame on Ty early on… his choice was the right one, for maybe the wrong reasons.

Catch Me, Cowboy is a heart wrenching second chance love story.  You may pick one side or the other, but you won’t walk away unemotionally from this story.  I would highly recommend Ty and Shelby’s story to any Romance reader who needs the deeper connection, the reasons behind the decisions – and charming, believable characters.  If you haven’t visited Marietta Montana before, this would be a lovely introduction.