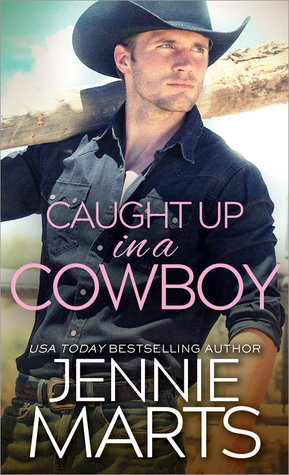 Rockford James was raised as a tried and true cowboy in a town crazy about ice hockey. Rock is as hot on the ice as he is on a horse, and the NHL snapped him up. Now, injuries have permanently benched him. Body and pride wounded, he returns to his hometown ranch to find that a lot has changed. The one thing that hasn’t? His feelings for high school sweetheart and girl-next-door Quinn Rivers.

Quinn had no choice but to get over Rock after he left. Teen aged and heartbroken, she had a rebound one night stand that ended in single motherhood. Now that Rock’s back–and clamoring for a second chance–Quinn will do anything to avoid getting caught up in this oh-so-tempting cowboy…

Titles in the Cowboys of Creedence series include:  Caught Up In A Cowboy – You Had Me At Cowboy –

Sometimes the things we do as teenagers, the exaggerated self-importance, the risks we took and the hearts we broke come back to haunt us for a very long time.  Rock and Quinn know that truth very well, they’ve lived it every single day since Rock left his small town and the girl he loved far behind in his quest for his dream, for fame and perhaps to prove himself.  Now, nine years later, Rock has come home to recuperate from an injury and his future is very much up in the air.  With his professional career, certainly.  And with the woman he loved long ago and never ever stopped loving.  He knew he’d made the biggest mistake of his life when he didn’t take Quinn with him on that dream of his.  Now he has to figure out if he can repair the damage done and finally get the girl he  loved back where she belonged all along, right at his side.

The first story in a series always carries a lot of weight and expectations for me.  It will decide if I continue with a series or if I stop at the first one.  Caught Up In A Cowboy made that choice very easy.  Quinn and Rock quite easily captured my attention and my emotions – and young Max was just the topping on the sweet deal that brings us into their world.  It takes a strong man to admit when he’s messed up, it takes a wiser man to do something about it and fix the mistake.  Rock might have acted foolishly as a younger man but he knows what he needs now and watching the interactions between Rock and Max simply melted my heart.  Quinn is a strong woman, but one who made a choice based on pain.  She cannot regret that mistake because it brought Max into her life.  She never stopped  loving Rock no matter how hard she tried to convince herself it was the wiser thing to do.  Watching Quinn and Rock find their way back together was emotional, fun, steamy and a real joy.  I had fun with this story and now I need to know what comes next.  If you’re in the mood for a satisfying romance then I’d recommend Caught Up In A Cowboy, you just might find yourself a new series to enjoy as well – I know I have.

Tags: Caught Up In A Cowboy, Contemporary Romance, Cowboys of Creedence #1, Jennie Marts