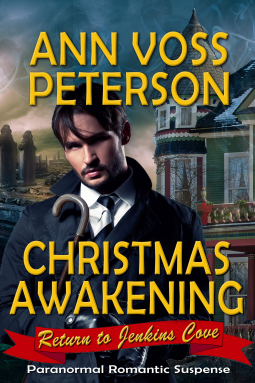 Something evil lurks in the charming small town of Jenkins Cove. When Sophie Caldwell devotes a room in her B&B to communicating with spirits, dangerous secrets rise to the surface, and the lives of three couples will never be the same.

After ten long years, Marie Leonard returns to Jenkins Cove determined to prove her father was murdered. Desperate, she tries to communicate with his spirit, but the only answer she receives is from the deceased mistress of Drake House… the wife of the man who had once been the love of Marie’s life.

Brandon Drake has made plenty of mistakes over the years, and the one that haunts him most is letting Marie go. He thought he could move on by marrying the beautiful and accomplished Charlotte—and he tried to make their marriage work—but he could never forget Marie. When Charlotte dies in a fiery car crash, Brandon blames himself and withdraws from the world—until Marie shows up on his doorstep, speaking of ghosts and murder, and Brandon knows he must protect her. Because even though she can never be his, he can’t bear to lose her… not again.

Return to Jenkins Cove: Christmas Spirit… Christmas Awakening… Christmas Delivery… Each of these stories are complete novels, but only the full series will get to the bottom of all the ghostly happenings in Jenkins Cove.

Marie has returned to Jenkins Cove under the worst of circumstances, her father’s death.  Although Marie believes his death was no accident for he never would have been even close to the water considering his fears.  He was murdered for unknown reasons – but she is determined to find out who and why.  And if she has to converse with those beyond the grave to get to the truth… so be it.  Returning home will also bring her face to face with the man she once loved, still loves if she’s honest with herself.  He chose another and Marie left town.  Now a widower Brandon has answers that Marie needs on so many things, convincing him to give her honest answers may just open up wounds that should be left alone.  Two people who still love each other – will they take the risk of offering their love again?

Christmas Awakening is an interesting story that falls more on the romantic side of the scale rather than the paranormal or suspense side.  There are secrets at Drake House and Marie’s determination to find out who killed her father will bring many of those secrets out into the open… where some people do not want them to be.  I enjoyed this story.  While it wasn’t exactly what I was expecting, given the first story in this series, it still was engaging with interesting twists and turns.