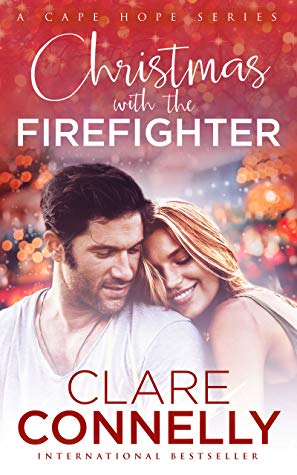 CHRISTMAS WITH THE FIREFIGHTER is an emotional opening story to the Cape Hope series, and I’ll definitely be following this series.  Yet, in order to give a frank review without major spoilers, I do need to say that Ally triggered one of my annoyance reactions quite strongly and that shaded how I saw her throughout this story,  It’s in the Cover Description so it’s not a spoiler but I will immediately react to someone who is lying throughout falling in love with not only Luke but with Stella as well.  I “got” Ally’s reasons, in her mind at least, but it went on for far too long for me to overlook it as “necessary”.  And, again, I understand why it was taking her so long to confess to Luke.  For some people, like me, this fact will matter and have an impact on how Ally is seen.  We all make choices, and this was a choice that could have cost Ally some very important people in her life, even if, at the time, she felt the lie was necessary.  I may sound harsh, yet I despise being lied to, and yes, this is an emotional trigger for me.

Setting aside my reaction to Ally/Amy (yes, I can do that), CHRISTMAS WITH THE FIREFIGHTER brought me a story that is emotional, full of people I fell in love with (try not loving little Stella), a quirky small town that I can’t wait to explore in future stories, and a man who has loved hard and lost through no one’s fault who is beginning to fall for another woman after his wife’s death in childbirth.  I enjoyed Luke and Stella so much – and even though Ally was not my favorite person her interactions with Stella won a smile or two from me along the way.  This is a story that touched me, got reactions from me in far different ways, and that I enjoyed enough to want to go back for more stories in this series.  And in the end – isn’t that what a good story is supposed to do?  Get a reaction?  You’ll have to make up your own mind about Ally but I enjoyed this story, even with my dislike of lies.