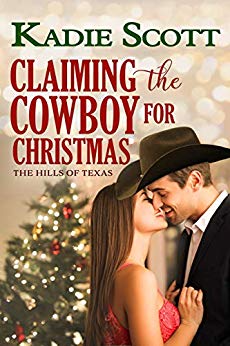 CLAIMING THE COWBOY FOR CHRISTMAS, the fourth title in The Hills of Texas gives us an interesting take on the second chance with a friend romance.

There was a time when Jennings was sure Ashley would pick up on his affection for her, that she’d see beyond the “best friend zone” that she’d put him in quite firmly.  But other events happened that changed lives.

Now Ashley is back in town for her twin sister’s wedding – to Ashley’s ex-boyfriend.  And very few people in town are buying the “It’s okay, I wish them happiness.  I’m so over him.” mantra that Ashley seems to be repeating over and over.  The truth is she is over him – and she wishes her sister and new brother-in-law happiness.  It’d be nice if someone believed her.

Jennings knew stepping in to help Ashley waylay those beliefs would be risky, most definitely risky for his heart.  But once the rumor mill gets ahold of something new they rarely let it go – and now he finds himself “in a romantic relationship” with the only woman he’d wanted.  Too bad it’s just a rumor – or is it?

CLAIMING THE COWBOY FOR CHRISTMAS  is an excellent addition to The Hills of Texas series.  It’s also a story with layers, and it was the layers of Ashley and Jennings that fascinated me throughout their story.  Jennings mistaken belief that Ashley truly wasn’t over the ex, the almost over the top jealousy he felt was realistic.  Sometimes we want something so badly that we simply cannot believe it’s ours for the risk of reaching out for it.  I enjoyed their story and revisiting with old book friends once again.  If you’re in the mood for a good Christmas Romance or just a relatable, slice of life romance then you’ll want to check this story (or this series) out real soon.

« Finn by Melody Anne
A Dash of Christmas by Samantha Chase »