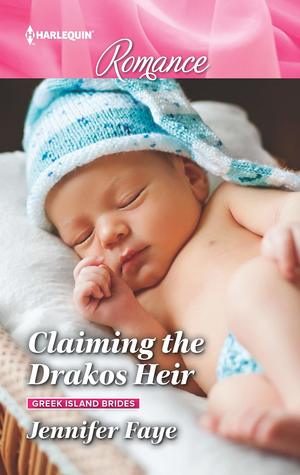 CLAIMING THE DRAKOS HEIR is the second story in the Greek Island Brides trilogy.  We met Popi in the first story as a strong secondary character, now she gets to shine and perhaps find happiness after a heartbreaking tragedy.

Popi agreed to be a surrogate for her sister and she is very, very close to her due date.  Her sister and brother-in-law were tragically killed which leaves Popi to raise their/her child on her own.  Or so she thought until Apollo showed up on the island daring to make a claim on the baby as his family’s heir.  Tempers are about to flare and passions engaged as this couple fights for what they believe is the right decision – when in reality, the attraction between them is blossoming into a different outcome to their disagreement over the future of the baby.

I was easily caught up in the Greek Island Brides trilogy once again with a love story that is both heartbreaking and heartwarming.  It’s difficult to make a real decision about someone you’ve never met when you only have one other person’s opinion to go by – and not a good opinion by any definition.  Popi was surprised that Apollo was so very different from what she’d been lead to believe.  He might be a billionaire, but he knows the value of hard work, taking care of life himself, and more down to earth than she would have imagined.  Apollo is stubborn, however, but so is Popi.  Both have issues about their siblings’ deaths, both have to trust in the emotions developing between them, and ultimately, both have to decide what is truly best for the baby about to make an appearance.  They each will have to trust and take risks, but that’s what falling in love is all about really.

If you love a Romance that touches your heart, makes you laugh or shed a few unexpected tears then you’ll want to continue the Greek Island Brides trilogy with CLAIMING THE DRAKOS HEIR.  If you haven’t read the first story, which I loved, you “could” read this one on its own, but you’ll also have a better feel for the island, the characters, and the overall storylines if you can go back to the beginning – in my opinion.  I was captured from the first pages right through to the end, and I’m so ready to dive into the next story.

I own a Kindle edition of Claiming the Drakos Heir

« A Royal Christmas Wish by Lizzie Shane
Cowboy to the Rescue by A.J. Pine »