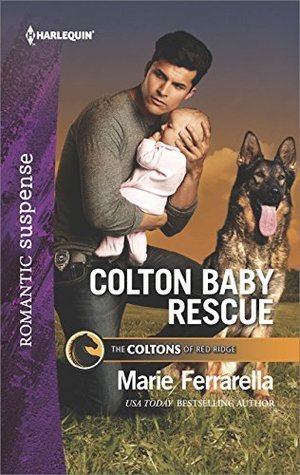 Surprisingly, I’m actually glad that I’m starting The Coltons of Red Ridge series now since the final story in this series was published this month… and now I can binge read the entire series without having to wait a month for the next book.  Sometimes coming to the party late actually works to my benefit.

The world building in COLTON BABY RESCUE is so fine-tuned that there was never an information dump (which I never enjoy), but an immediate fall into the story that simply builds in momentum and in world building for the rest of this series.  We begin to see threads that will be woven throughout the other stories… and while there is a resolution to this couple’s story, there are open-ended questions that will lead to the next stories.  I expect that in a series this long that involves a feud between families, several sub-storylines, an unsolved murder and a woman on the run for the rest of the series.  We’ll meet some key players in Carson and Serena’s story, many who will have their story told within this series, as well as being introduced to more than a few scumbags.  Some of the secondary characters you’ll want to know more about, others you’ll simply loathe on sight, and some are simply clueless about any reality but their own.  There’s a good mix of personalities here, and I’m definitely anxious to discover more.

Carson is bullheaded, stubborn and believes he knows exactly who killed his half-brother Bo… after all her name was written in Bo’s blood right beside his body with his own bloody finger.  But things aren’t always a “clear” as they appear and it won’t take long before holes are shot through Carson’s theory… but he will cling to it for a long time until he’s convinced that there might be other possibilities.  His search for Demi takes him to the Colton Ranch, the Double C where he encounters not only the very elitist, nose in the air, too cultured to fart Mrs. Colton and the uptight Mr. Colton… and Serena with her 3-month-old daughter Lora.  While Carson is convinced Demi is a killer, Serena is just as convinced that her cousin, friend is being framed — these two will stubbornly stick to their beliefs while other events begin happening that change Carson’s opinion.

I had such an enjoyable time with COLTON BABY RESCUE.  It is exactly the type of series that I will sink my teeth into and enjoy the heck out of the journey.  Carson and Serena make an interesting, combustible couple.  Watching them move from suspicion to passion was a wild ride that sizzled with tensions throughout.  The main mystery is just beginning, yet it also is addicting to figure out.  A few sub-plots liven up this story with tension, really bad men and the right touch of wrapping up just enough to keep the reader on their toes and ready for the next book in the series.  I now need to know what happens so I am hooked on The Coltons of Red Ridge series – which, thankfully, I can now binge read.  I loved this story and would highly recommend COLTON BABY RESCUE to any reader who enjoys country living, a touch of cowboys, romantic suspense, mysteries to solve and a sizzling, believable couple to root for.  Yeah, I’m hooked now, no doubt.

I did read this title through my Kindle Unlimited subscription – however, COLTON BABY RESCUE was the only book in KU (so far) so I’ve purchased the rest of the series.

**This review also appears on my Lovin’ A Cowboy Romance blog **