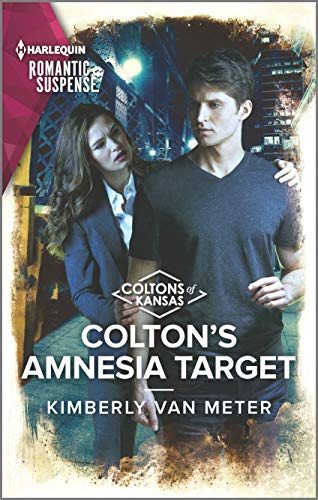 ‘Colton’s Amnesia Target‘ is the second title in the multi-author ‘Coltons of Kansas‘ mini-series and Jordana’s about to have even more questions added to her growing list when Clint shows up in town unexpectedly and the victim of an assault (or attempted murder).  Trouble is, Clint isn’t remembering why he was headed to Braxville, what information he might have had for Jordana that warranted a personal visit for right now Clint can’t recall much beyond his name – and that fact could get him killed.

When we left Jordana toward the ending of ‘Exposing Colton Secrets‘ a grisly discovery had been made on one of her father’s company’s properties which sorta solved one mystery but opened up a whole lot more.  Now a man she’d been in contact with shows up in town the victim of an assault with no memory of who, what, or why.  Being drawn toward a victim isn’t Jordana’s usual way of handling a case but Clint is doing a really good job of charming her and having her consider decisions she’d not usually make.  Her partner is making that fact abundantly clear.  But the only logical course of action is to work together to find clues, keep an eye out for more trouble… and perhaps fall in love along the way.

I enjoyed the bantering between Clint and Jordana (especially Jordana’s internal arguments with herself).  While there is little progress on the main crime of the series, there are definitely things happening in Clint’s case.  I have to admit that I liked the Clint without his memory more than the man he truly is once he rediscovered himself – although he did redeem himself I did like the non-arrogant Clint better.  But, that’s me.  ‘Colton’s Amnesia Target‘ is a fast-paced, intriguing Romantic Suspense, although I did guess who was the bad guy for sure, but only shortly before Clint and Jordana did.

If you enjoy a romance full of bantering, questions, re-inventing oneself, and a whole lot of danger then you’ll want to pick up ‘Colton’s Amnesia Target‘ soon and get caught up in this series for yourself.