Posted May 7, 2020 by Marsha in Connection to another series, Harlequin, Romantic Suspense, Series / 0 Comments 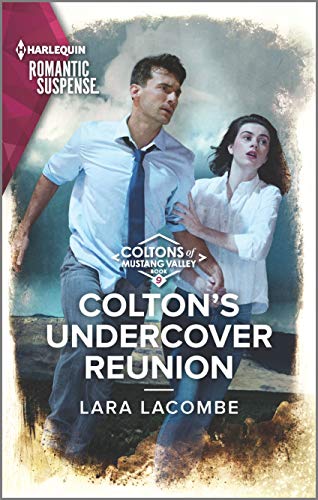 and a covert mission!

Soon, Santiago asks for help in return…going undercover as husband and wife to expose a dangerous scam. Working alongside him reminds Ainsley of what can never be.

This scheme should be hazardous only to her heart—but when the stakes ramp up, “till death do us part” becomes all too real.

Colton’s Undercover Reunion, the ninth title in the Coltons of Mustang Valley (mini)series begins at high speed and never really slows down until the end… and then we’re faced with what comes next for the Coltons.  I’m enjoying this series, and Santiago and Ainsley’s romance only added to that feeling with a tense, intricate plot that had surprises and twists appearing throughout their story.  As we are now heading toward the final two releases this June, I expect things to heat up, for more clues to drop, and for many things to finally make “perfect” sense.

Once upon a time Ainsley and Santiago were a couple in love, right up until Santiago decided to head to New York to enrich his career chances leaving Ainsley behind.  It’s been five years, and life moves on but when her brother (or the man she’s always known as her brother) needs the best defense attorney around Ainsley knows there is only one man she’d trust with her brother’s life – the man she once loved, the man who broke her heart and moved on.  It’s a jar of pain that she doesn’t really want to open but for Ace, she’d do anything… even face the man who walked away.

Santiago knew he’d hurt Ainsley years ago.  He’d do it again if necessary because his leaving was really for her own good.  Or so he kept telling himself.  When she asked for help he didn’t hesitate for two reasons.  One – he’d do anything to help Ainsley.  Two – he needed her help on something as well and together they could take down a couple of con artists out to rob and harm a lot of people, his little sister among them.  He just hadn’t considered how good it felt to be with her again, how easy it was to fall all over again, or the amount of danger he was putting them both in with this plan.

Colton’s Undercover Reunion is a tempting journey with two people who obviously never stopped loving each other as they get a second chance to get it right – and put some really bad guys away for their actions on innocent people simply looking for help with their marriages.  The story is fast-paced, full of surprises, and adds more to the ongoing mysteries in the Coltons of Mustang Valley series.  If you’ve enjoyed this series then you’ll want to pick up Ainsley’s and Santiago’s story soon – if you’re just now discovering it then I’d start back at the beginning and enjoy all the stories leading up to this one.